Review; The Unbinding of Mary Reade by Miriam McNamara 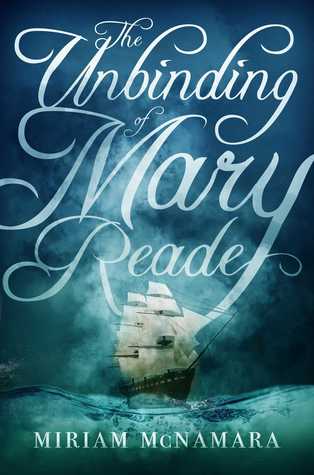 A while ago I read the novel The Unbinding of Mary Reade by Miriam McNamara and today I'll post my review.
Description from Goodreads
A clever, romantic novel based on the true story of a girl who disguised herself as a boy to sail with the infamous pirates Anne Bonny and Calico Jack—and fell in love with Anne Bonny.

There’s no place for a girl in Mary’s world. Not in the home of her mum, desperately drunk and poor. Not in the household of her wealthy granny, where no girl can be named an heir. And certainly not in the arms of Nat, her childhood love who never knew her for who she was. As a sailor aboard a Caribbean merchant ship, Mary’s livelihood—and her safety—depends on her ability to disguise her gender.

At least, that’s what she thinks is true. But then pirates attack the ship, and in the midst of the gang of cutthroats, Mary spots something she never could have imagined: a girl pirate.

The sight of a girl standing unafraid upon the deck, gun and sword in hand, changes everything. In a split-second decision, Mary turns her gun on her own captain, earning herself the chance to join the account and become a pirate alongside Calico Jack and Anne Bonny.

For the first time, Mary has a shot at freedom. But imagining living as her true self is easier, it seems, than actually doing it. And when Mary finds herself falling for the captain’s mistress, she risks everything—her childhood love, her place among the crew, and even her life.

Breathlessly romantic and brilliantly subversive, The Unbinding of Mary Reade is sure to sweep readers off their feet and make their hearts soar.
My Thoughts on the Book
I really liked the descriptive writing style of the author and the plot was engaging. A huge plus was the f/f romance, but what annoyed me a bit was the feeling that Anne thought men should "rescue" her from her problems. I thought she was a bit more badass than that. Also, I felt that a lot of the characters were rather two-dimensional and needed a bit more development to be more complex.
Overall, it was a quick read, but it could have been a wee bit better.
historical fiction omtale roman