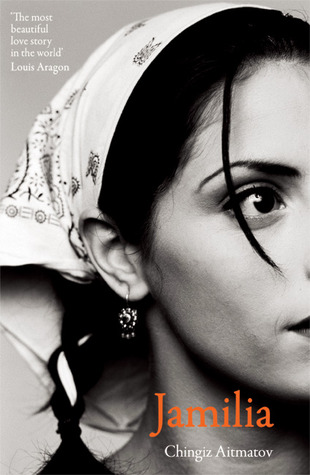 A while ago I read the book Jamilia by Chingiz Aitmatov, who is from Kyrgyzstan and today I'll post my review.
Description from Goodreads
"Jamilia" is told from the point of view of a fictional Kyrgyz artist, Seit, who tells the story by looking back on his childhood. The story recounts the love between his new sister-in-law Jamilia and a local crippled young man, Daniyar, while Jamilia's husband, Sadyk, is away at the front during World War II.

Based on clues in the story, it takes place in northwestern Kyrgyzstan, presumably Talas Province. The story is backdropped against the collective farming culture which was early in its peak in that period.

Chingiz Aïtmatov was born in Kyrgyzstan in 1928. His work appeared in over one hundred languages, and received numerous awards, including the Lenin Prize. He was the Kyrgyz ambassador to the European Union, NATO, UNESCO and the Benelux countries.

Translated by James Riordan.
My Thoughts on the Book
While it's short, it's beautifully written and it transports the reader to Kyrgyzstan. The prose is lyrical, even for a translation, and one end up immersed in rural life on the steppe. What I also really enjoyed, was the love for the land portrayed in the book through the eyes of Seit. Also, while this is a love story, it's by no means a cheesy romance.
land i verden omtale roman