Showing posts from February, 2018
Show All

It's Wednesday again, which means it's time for a new My Favourite... post thanks to  Maureen's Books  and the theme of the week was favourite childhood movie. I have no issues admitting that I was one of the more peculiar kids with a love of all spooky and creepy as a kid (yeah, two of my favourite cartoons were Scooby Doo and The Addams Family), so when I was around eight or nine, my favourite childhood movie was The Addams Family Values. I might add that I still love that movie and I do potentially have my Wednesday Addams - tendencies at times.
10 comments
Read more

Book Blitz; Fire and Bone by Rachel A. Marks

It's Tuesday again, which means it's time for a new Top Ten Tuesday, courtesy of  The Artsy Reader Girl . The theme of the week was books I could re-read forever. My list is; Milk and Honey by Rupi Kaur Dirty Pretty Things by Michael Faudet Ariel (The Restored Edition) by Sylvia Plath Safranhuset by Rosanna Ley Stallo by Stefan Spjut The Complete Maus by Art Spiegelman The Woman in Black by Susan Hill Nattens sirkus by Erin Morgenstern The Bear and the Nightingale by Katherine Arden Dracula by Bram Stoker
4 comments
Read more 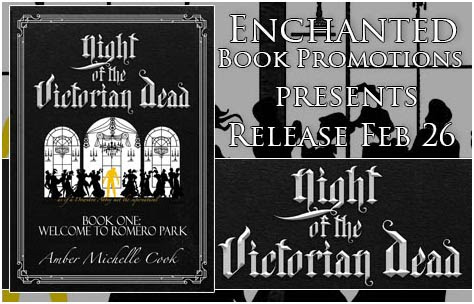 About the Book A Pride & Prejudice & Zombies for lit lovers! Mr. Edward Dorchester invites several families of his acquaintance to a ball at his country estate, the night the Harvest moon rises fell and tainted. While those within are consumed by their hopes and schemes, tenants are going missing and arriving guests savagely attacked. A gothic horror tale of classic zombies meets manners, with an ensemble, upstairs-downstairs cast of Vic. Lit inspired characters. The knowing modern reader can follow unsuspecting characters down the road to the inevitable. Author Bio Amber Michele Cook writes stories of deep, meaningful fun. A devotee of Georgian to Edwardian period pieces, she adores Speculative Lit: Victorian literature-inspired works with a supernatural or paranormal element. Partly raised in Germany, she went to an international school for high-school, majored in linguistics, loves literature and period pieces. She's also a photography/graphic arts artis
Post a Comment
Read more

This post is part of a virtual book tour organized by Goddess Fish Promotions . Jay Hogan will be awarding a $20 Amazon or Barnes and Noble GC to a randomly drawn winner via rafflecopter during the tour. Click on the tour banner to see the other stops on the tour. Michael: Two years ago I made a mistake, a big one, and then I threw in another couple just for good measure. I screwed up my life big time but I made it through. I was lucky. Then I was given the opportunity for a fresh start. Two years in Auckland, NZ, ‘The City of Sails’. Away from the LA gossip, a chance to breathe, to get my life back together. I grabbed it and packed my new set of golden rules with me. I don’t do relationships. I don’t do commitment. I don’t do white picket fences. And I especially don’t do arrogant, holier-than-thou, smoking hot K9 officers who walk into my ER and rock my world. Josh: The only thing I know for certain about Dr. Michael Oliver is the guy is an arrogant, untrustwor
6 comments
Read more

Book Tour & Giveaway; The Arban and the Saman by Laurel A. Rockefeller

The Arban and the Saman by Laurel A. Rockefeller Genre: Mystical Historical Romance What would you risk for love? It is the year 1211 CE. Five years after being declared "khan," Chinggis Khan and his invading hordes are sweeping across the north China plain, right into the nűzhen heartland. Their objective: conquest of the mighty Jin Empire. Among those sent into Liaoning is a low-ranking officer (an arban) named Mongke Nichan, a spiritual man on a personal quest to find his soulmate and fulfill a prophesy long lingering in his heart. But finding his twin flame and convincing her are two completely different matters in this wartime romance that takes you into the very heart of Asian mysticism and deep into the ranks of the powerful Mongol Horde. **only .99 cents on Amazon!!** Add to Goodreads Amazon * Apple * B&N * Kobo * Smashwords Born, raised, and educated in Lincoln, Nebraska USA Laurel A. Ro
Post a Comment
Read more

Book Tour & Giveaway; Outcasts of the Worlds by Lucas Paynter

Outcasts of the Worlds Outcasts of the Worlds Book 1 by Lucas Paynter Genre: Cosmic Fantasy 456 pages A confidence man. A liar. A monster. Flynn has seen himself for what he really is and has resolved to pay for everything. Even if it means spending the rest of his days locked in Civilis, a tower prison for society's unwanted - "half-humans" gifted by the fallout of nuclear holocaust centuries past. Jean, a prisoner in the neighboring cell, has different ideas and despite himself, Flynn finds himself joining her daring escape. After rescuing her friend Mack, the three flee Civilis as Flynn pieces together the hours before his capture and finds himself drawn to an abandoned facility where a rift to another world opens at his nearing. Together they will venture farther beyond the stars than humanity ever imagined, find others like them that will never belong, and tangle with forces both ancient and immortal. They stand alone, hated and s
1 comment
Read more

SINthetic The New Lyons Sequence #1 by J.T. Nicholas Genre: Science Fiction – Cyberpunk Noir Pub Date: 1/23/2018 The Artificial Evolution They look like us. Act like us. But they are not human. Created to perform the menial tasks real humans detest, Synths were designed with only a basic intelligence and minimal emotional response. It stands to reason that they have no rights. Like any technology, they are designed for human convenience. Disposable. In the city of New Lyons, Detective Jason Campbell is investigating a vicious crime: a female body found mutilated and left in the streets. Once the victim is identified as a Synth, the crime is designated no more than the destruction of property, and Campbell is pulled from the case. But when a mysterious stranger approaches Campbell and asks him to continue his investigation in secret, Campbell is dragged into a dark world of unimaginable corruption. One that leaves him questioning the true nature of
1 comment
Read more

It's Wednesday, which means it's time for a new My Favourite... post thanks to  Maureen's Books  and the theme of the week was favourite movie of 2017. As I book lover, I guess there is no surprise that one of my favourite movies of 2017 is The Beauty and the Beast with Emma Watson as Belle.
8 comments
Read more

It's Tuesday, which means it's time for a new Top Ten Tuesday, courtesy of  That Artsy Reader Girl . The theme of the week is books I've decided I'm no longer interested in reading. My list includes; Divergent by Veronica Roth The Lightening Thief by Rick Riordan The Maze Runner by James Dashner The Hunger Games by Suzanne Collins The Secret Garden by Frances H. Burnett Anne of Green Gables by L. M. Montgomery Don Quixote by Miguel de Cervantes The DaVinci Code by Dan Brown Angela's Ashes by Frank McCourt The Girl with the Dragon Tattoo by Stieg Larsson
Post a Comment
Read more

Review; Above the Dreamless Dead: World War I in Poetry and Comics Edited by Chris Duffy 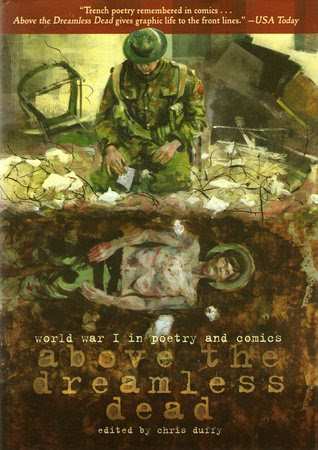 Those who know me well enough knows that I'm into poetry, history and graphic novels/comics. When I saw that all three elements were combined in Above the Dreamless Dead: World War I in Poetry and Comics, edited by Chris Duffy, I couldn't resist it. Description from Goodreads As the Great War dragged on and its catastrophic death toll mounted, a new artistic movement found its feet in the United Kingdom. The Trench Poets, as they came to be called, were soldier-poets dispatching their verse from the front lines. Known for its rejection of war as a romantic or noble enterprise, and its plainspoken condemnation of the senseless bloodshed of war, Trench Poetry soon became one of the most significant literary moments of its decade.  The marriage of poetry and comics is a deeply fruitful combination, as evidenced by this collection. In stark black and white, the words of the Trench Poets find dramatic expression and reinterpretation through the minds and pens of some of the gr
Post a Comment
Read more 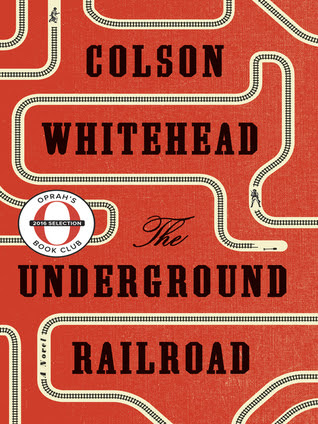 Considering that I participate in Platypire Diversity Challenge and the theme of February was Black/African American History Month, I decided to read The Underground Railroad by Colson Whitehead. Today I'll post the review of the novel. Description from Goodreads Cora is a slave on a cotton plantation in Georgia. Life is hellish for all the slaves but especially bad for Cora; an outcast even among her fellow Africans, she is coming into womanhood - where even greater pain awaits. When Caesar, a recent arrival from Virginia, tells her about the Underground Railroad, they decide to take a terrifying risk and escape. Matters do not go as planned and, though they manage to find a station and head north, they are being hunted. In Whitehead's ingenious conception, the Underground Railroad is no mere metaphor - engineers and conductors operate a secret network of tracks and tunnels beneath the Southern soil. Cora and Caesar's first stop is South Carolina, in a city that init
Post a Comment
Read more

Wicked Soul  Nora Ash (Ancient Blood, #1) Publication date: February 10th 2017 Genres: Adult, Paranormal, Romance He saved me… And then he blood-bonded me. Now I’m his. My first meeting with a Chicago vampire went better than expected. Up until that night, all I knew about vampires was limited to a few common facts: they drink blood, they get a mean sunburn and if you find yourself alone with one, you’re dead. Except he didn’t kill me. Sexy, broody Warin clearly had his own reasons for sparing my life and tying me with his blood, but if he’d known how much trouble I’d attract, I bet he wouldn’t have bothered. When he blood-bonded me, secrets even I didn’t know about myself came to light. Secrets that will pull us both deep into the eternal war between vampires and the witches determined to rid the world of their evil. We have only one choice now: fight the forces hell-bent on breaking our bond… Or die. Goodreads / Amazon / Barnes & Noble / iBooks / Kobo Au
Post a Comment
Read more
More posts