Review; Above the Dreamless Dead: World War I in Poetry and Comics Edited by Chris Duffy 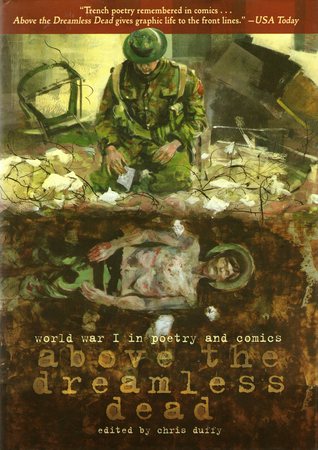 Those who know me well enough knows that I'm into poetry, history and graphic novels/comics. When I saw that all three elements were combined in Above the Dreamless Dead: World War I in Poetry and Comics, edited by Chris Duffy, I couldn't resist it.

Description from Goodreads
As the Great War dragged on and its catastrophic death toll mounted, a new artistic movement found its feet in the United Kingdom. The Trench Poets, as they came to be called, were soldier-poets dispatching their verse from the front lines. Known for its rejection of war as a romantic or noble enterprise, and its plainspoken condemnation of the senseless bloodshed of war, Trench Poetry soon became one of the most significant literary moments of its decade.
The marriage of poetry and comics is a deeply fruitful combination, as evidenced by this collection. In stark black and white, the words of the Trench Poets find dramatic expression and reinterpretation through the minds and pens of some of the greatest cartoonists working today.With New York Times bestselling editor Chris Duffy (Nursery Rhyme Comics, Fairy Tale Comics) at the helm, Above the Dreamless Dead is a moving and illuminating tribute to those who fought and died in World War I. Twenty poems are interpreted in comics form by twenty of today's leading cartoonists, including Eddie Campbell, Kevin Huizenga, George Pratt, and many others.

My Thoughts on the Book
Well, where do I start? I really loved reading this one. The illustrations add even more depth and layers to the poems. Due to the illustrations, I would believe that these poems could reach a new audience and perhaps an audience who is a bit apprehensive about poems (I guess a lot of us have been pretty much fed up by poetry due to crappy teachers at high school at some point).

If anyone who is into either history, comics or poetry would probably be intrigued by Above The Dreamless Dead.
diktsamling engelsk graphic novel historie omtale tegneserie