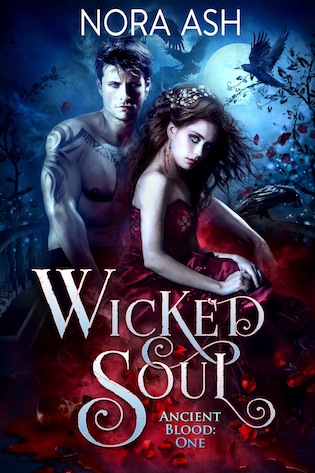 He saved me… And then he blood-bonded me. Now I’m his.
My first meeting with a Chicago vampire went better than expected.
Up until that night, all I knew about vampires was limited to a few common facts: they drink blood, they get a mean sunburn and if you find yourself alone with one, you’re dead.
Except he didn’t kill me.
Sexy, broody Warin clearly had his own reasons for sparing my life and tying me with his blood, but if he’d known how much trouble I’d attract, I bet he wouldn’t have bothered. When he blood-bonded me, secrets even I didn’t know about myself came to light.
Secrets that will pull us both deep into the eternal war between vampires and the witches determined to rid the world of their evil.
We have only one choice now: fight the forces hell-bent on breaking our bond…
Or die.

Author Bio:
Nora Ash writes the sort of books that have your toes curling and your blood pulsing. Her stories are often dark and always thrilling, with lots of sexy bad boys and the women who spur their desires. When not typing away at a story, Nora paints, eats chocolate or go for hikes around the English countryside with her very own bad boy.
Sign up to get updated about new releases at: http://www.nora-ash.com/newsletter/

“Come to me, little one,” he said, breaking off my spiraling thoughts. I twisted to grab his offered hand, because I couldn’t exactly throw a fit in front of the watching vampires, and got to my feet. I did manage to throw him a pretty convincing death glare as I straightened up.
Warin ignored it and motioned for me to straddle him. I arched an eyebrow at him, but he simply looked at me with calm expectancy.
Alrighty then, if he really wanted this to get as awkward as it could…
I lifted my skirts enough that I could climb onto the armchair, a knee on each side of his thighs. His strong hands went to my hips, steadying me as I lowered myself onto his lap.
His muscles were strong, his clothes shielding me from his cool flesh. When I looked up, doing my best to force down the blush trying to take over my entire body at the intimate positioning, I captured his gaze—and the knowledge that a few hundred people were watching us faded to the background.
Warin’s blue eyes were wholly focused on me, and his expression was no longer cold and distant. There was so much gratitude, so much regret… so much of everything in their blazing depths that it nearly stole my breath away. He was still silent, but in that moment, we didn’t need words. His gaze was begging me for my consent. To remember my trust in him.
Swallowing hard, I nodded once. My anger was gone, and in its place was only a low-set fizzle of nerves.
Warin’s sigh of relief was almost imperceivable. He slid his hands up along my waist, letting one brush my curls off my left shoulder. Exposing my neck.
I drew in a deep breath and closed my eyes tightly, waiting for the inevitable.
“Look at me, Liv,” he said.
I obeyed, unable to resist the gentleness of his voice, and was once again captured in his blazing gaze.
Warin leaned his head back a little and opened his mouth. A sharp snick made me gasp, and I bit my lip hard at the sight of his sharp fangs. There was no denying what he was now. A creature of the night, made to kill.
And yet… he was still Warin.
His hand by my neck rubbed soothing circles over the tendons there, making my skin sing with an odd sort of anticipation. Not so much fear for the pain, but… something else.
When Warin wrapped his free arm tighter around me and pulled me close to his chest, I realized what that something else was.
There was no holding back the blush that set in when the crisp scent of night air and musk that was so uniquely Warin hit my nostrils. Yeah, there was no mystery to why I was suddenly feeling all kinds of excited about what was going on.
Dammit, Liv, control your ovaries! This is not a sexy moment!
Warin moved his hand from my neck for a moment, undoing the top two buttons of his shirt.