Showing posts from November, 2017
Show All

Omtale; I am Malala: The Story of the Girl Who Stood Up for Education and Was Shot by the Taliban av Malala Yousafzai med Christina Lamb 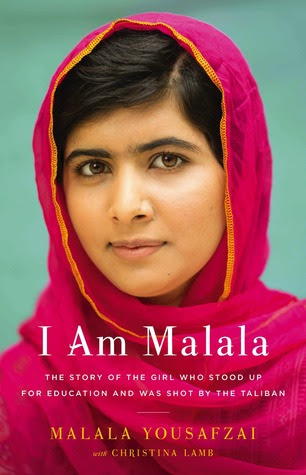 (Dette innlegget inneholder affiliate linker.) Tatt i betraktning at jeg deltar i POC Reading Challenge og jeg hadde  I am Malala av Malala Yousafzai med Christina Lamb i bokhylla, endte jeg opp med å lese den. Nå kommer omtalen. Beskrivelse fra Goodreads I come from a country that was created at midnight. When I almost died it was just after midday. When the Taliban took control of the Swat Valley in Pakistan, one girl spoke out. Malala Yousafzai refused to be silenced and fought for her right to an education. On Tuesday, October 9, 2012, when she was fifteen, she almost paid the ultimate price. She was shot in the head at point-blank range while riding the bus home from school, and few expected her to survive.  Instead, Malala's miraculous recovery has taken her on an extraordinary journey from a remote valley in northern Pakistan to the halls of the United Nations in New York. At sixteen, she has become a global symbol of peaceful protest and the youngest-ever Nobel Pea
Post a Comment
Read more

It's yet another Wednesday, which means it's time for a new My Favourite post, thanks to  Maureen's Books  and the theme of the week was museum. There's so many fun and interesting museums around the globe, but one that I really like is Victoria and Albert Museum in London. There's so much to see there, that it's almost impossible to get over everything in one day. One museum, two grand entrances. Swipe right to compare our two very contrasting, but equally extraordinary, grand entrances. In 1891 a competition was held for the rare opportunity to extend the V&A and create a truly huge façade in South Kensington. The huge sculpted museum entrance along Cromwell Road today was a competition-winning design by the young architect Aston Webb. More than a century later, Amanda Levete’s architecture firm AL_A similarly won an extensive international competition to do the very same: to physically transform the V&A, and to continue the Museum
8 comments
Read more

It's Tuesday, which means it's time for a new Top Ten Tuesday post, thanks to  The Broke and the Bookish  and the theme of the week was top ten books on my winter TBR. Some of the books happens to be advanced reading copies I've put on hold and basically "needs" to read soon as they are not-that-advanced-reading-copies anymore. My list includes; Urmakeren i Auschwitz by John Donoghue Håp i høstfarger by Susan Meissner Station Eleven by Emily St. John Mandel Den forbudte elven by Chigozie Obioma Gåten by Jessie Burton The Devil in the White City by Erik Larson Beatrix & dunklumpene av Cathrine L. Wilhelmsen Glimt fra okkupasjonen bind 1; Tyske vinger over Sola og Forus av Militærhistorisk forening Rogaland Charlotte av David Foenkinos Vi som er annerledes av Veselin Markovic
Post a Comment
Read more 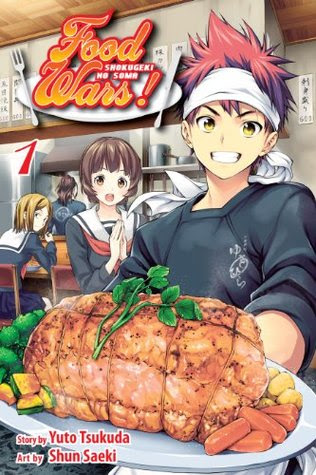 (This post contains affiliate links.) I remembered that I had joined in on Foodies Read Challenge and I ended up reading the manga  Food Wars! Vol. 1  by Yuto Tsukuda and Shun Saeki as a result and here comes the review. Description from Goodreads Soma Yukihira's old man runs a small family restaurant in the less savory end of town.  Aiming to one day surpass his father's culinary prowess, Soma hones his skills day in and day out until one day, out of the blue, his father decides to enroll Soma in a classy culinary school!  Can Soma really cut it in a school that prides itself on a 10 percent graduation rate? And can he convince the beautiful, domineering heiress of the school that he belongs there at all?! My Thoughts On The Book Even though some of the characters might seem a bit one-dimensional it was still an entertaining read, especially if you're into manga and food. Food Wars also deals with social class and the expectations projected onto people in said cl
2 comments
Read more

Book Tour & Giveaway; Hypatia of Alexandria by Laurel A. Rockefeller

Hypatia of Alexandria The Legendary Women of World History #8 by Laurel A. Rockefeller Genre: YA Historical Fiction Teacher. Philosopher. Astronomer. Born in 355 CE. In the aftermath of Constantine's reign Hypatia of Alexandria lived in a collapsing Rome Empire, a world where obedience to religious authorities trumped science, where reason and logic threatened the new world order. It was a world on the edge of the Dark Ages. As libraries burned, she dared defend the light of knowledge. **Only .99 cents!!** Add to Goodreads Amazon * Apple * B&N * Kobo * Smashwords Born, raised, and educated in Lincoln, Nebraska USA Laurel A. Rockefeller is author of over twenty books published and self-published since August, 2012 and in languages ranging from Welsh to Spanish to Chinese and everything in between. A dedicated scholar and biographical historian, Ms. Rockefeller is passionate about education and improving history literacy worl
Post a Comment
Read more

Dial Meow for Murder A Lucky Paws Petsitting Mystery #2 by Bethany Blake Genre: Cozy Mystery Even an experienced pet sitter like Daphne Templeton can be fooled by animal behavior: how can an adorably tiny fuzz ball named Tinkleston be capable of sudden flying leaps with cat claws bared? But human behavior remains even more mysterious, especially when Tinkleston’s owner is murdered on the night of a gala fundraiser for Fur-ever Friends Pet Rescue. Accompanied by her unflappable basset hound, Socrates, Daphne plans to take charge of Tinks the Terror and leave the crime-solving to handsome detective Jonathan Black. But while luring the prickly Persian out of hiding, she uncovers clues that might take suspicion off her own mother. Maeve Templeton already has a reputation as a killer—in real estate. How far would she go to bag Sylvan Creek’s most coveted property, the Flynt Mansion? To expose the truth, Daphne finds herself donning a deranged clown costume on an aut
Post a Comment
Read more
More posts