Review; Century of the Death of the Rose: Selected Poems by Jorge Carrera Andrade 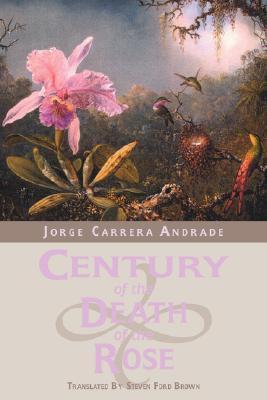 Last year, I ended up reading Century of the Death of the Rose: Selected Poems by Jorge Carrera Andrade. As the poet was from Ecuador, I could finally cross off that country for my World Literature Project and today I'll post my review.
Description from Goodreads
By the close of the twentieth century, the brilliant poets that had emerged from the Americas included Ruben Dario, Pablo Neruda, Cesar Vallejo, Vicente Huidobro, and Octavio Paz. To this list must be added Jorge Carrera Andrade, an Ecuadorian, who spent his entire adult life traveling as a diplomat, politician, and poet. Despite a brief flurry of attention generated in the United States by his book, Secret Country (New York: MacMillan, 1946), published just after he served as Ecuadorian Consul General to the United States in San Francisco, Andrade has since been forgotten by American anthologists and literary critics. But in fact the late Andrade was a leading figure in Latin American letters. This volume of his poetry was selected and translated by Steven Ford Brown and is presented in both Spanish and English.
My Thoughts on the Book
I enjoyed reading this poetry collection. Of course there was some poems I liked more than others, but overall it was an enjoyable read and I would recommend this poetry collection.
diktsamling land i verden omtale