Review; Hood Feminism: Notes from the Women That a Movement Forgot by Mikki Kendall 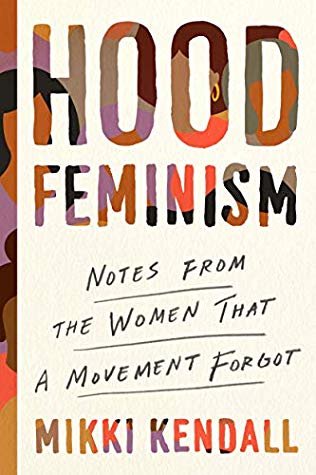 As I'm a feminist and I heard so much about Hood Feminism: Notes from the Women That a Movement Forgot by Mikki Kendall, I ended up reading it. Today I'll post my review.
Description from Goodreads
Today's feminist movement has a glaring blind spot, and paradoxically, it is women. Mainstream feminists rarely talk about meeting basic needs as a feminist issue, argues Mikki Kendall, but food insecurity, access to quality education, safe neighborhoods, a living wage, and medical care are all feminist issues. All too often, however, the focus is not on basic survival for the many, but on increasing privilege for the few. That feminists refuse to prioritize these issues has only exacerbated the age-old problem of both internecine discord and women who rebuff at carrying the title. Moreover, prominent white feminists broadly suffer from their own myopia with regard to how things like race, class, sexual orientation, and ability intersect with gender. How can we stand in solidarity as a movement, Kendall asks, when there is the distinct likelihood that some women are oppressing others?
My Thoughts on the Book
Hood Feminism is one of those books that needs to be read. It talks about topics such as gun violence, housing, black women's maternal health and lots more. Lots of the issues that's talked about is in many cases forgotten by the white, straight, cis-gendered feminism. Hood Feminism isn't pretty and it's not meant to be pretty. It's in your face, realizing that if you fit into the labels of "white, straight and cis-gender", you do have privilege that black and LGBT people don't have. This is an insightful book meant to educate, so please read it, regardless of whether or not you're well versed into intersectional feminism.
Hood Feminism is well worth the read and I highly recommend it.
faglitteratur omtale