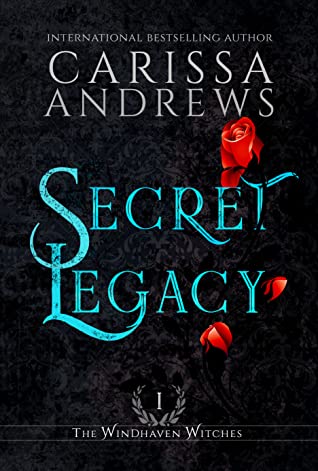 Last year I recieved an ARC of the fantasy novel Secret Legacy (The Windhaven Witches #1) by Carissa Andrews through Netgalley. I read it shortly afterwards and today I'll post my review.
Description from Goodreads
Family Secrets Shrouded in Death. An Ancestral Home with Secrets of its Own. And a Legacy of Power She Can’t Escape.

When Autumn gets a full scholarship invite to the Windhaven Academy, an exclusive college meant for witches and other supernaturals, she thinks someone in the head office has clearly made a mistake. She’s a mundane human with no special abilities whatsoever. Or so she thinks.

Ever since she moved into her dad’s ancestral home to give Windhaven Academy a try, strange things have been happening. There are weird, secret rooms in the house and her new friends keep urging her to learn more about her past in order to unlock her powers.

When Autumn finally uncovers her family’s secret legacy, she wants nothing more than to turn back time or walk away. But fate has other plans and if she doesn’t bow to the power coursing through her, she could destroy the entire fabric of life and death.

If you loved Necromancer: The Complete Series by MR Forbes, Supernatural Academy by Jaymin Eve, the Tracker Hive Academy by Avery Song, or the Fallen Academy by Leie Stone, then the Windhaven Academy is your next gotta-stay-up-all-night-and-binge-read series!
My Thoughts on the Book
I was pleasantly surprised reading Secret Legacy. It has some interesting world building, as well as an engaging plot. The characters were fleshed out and had their own voices and personalities. Although I might wanted to slap Autumn a few times due to her relationship with Wade due to the instalove and his secrets. Then again, it seems like lots of people has a few secrets in this book. I also liked the cliffhanger a bit, as it made me want to read the next installment of this series.
fantasy leseeksemplar netgalley omtale roman