Review; Nogged Off by Barbara Ross 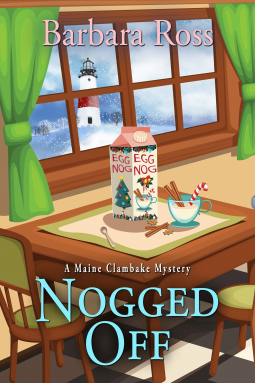 Last year I was fortunate enough to recieve an ARC of the Christmas-themed cosy mystery novella Nogged Off by Barbara Ross through Netgalley. I read it shortly afterwards, but I haven't published my review until now.

‘Twas the week before Christmas, and Julia Snowden’s escape from New York has just hit a snag. Fresh off accidentally poisoning half her colleagues with her “Killer Eggnog,” Julia’s would-be subletter, Imogen Geinkes, is now jobless and homeless—leading Julia to invite the young woman home for the holidays in Maine. But when they unload the rental truck in Busman’s Harbor, they find something that wasn’t on anyone’s packing list: the body of Imogen’s former boyfriend.

Suddenly, the wordplay in Imogen’s name—“I’m a jinx”—isn’t so adorable. But for all the calamities that follow in Imogen’s wake, Julia’s certain she’s no killer. As Julia digs into the case, the appearance of the ex’s brother—his identical twin—doubles the confusion. Has Imogene been double-crossed by an evil twin? Was the eggnog “accident” no accident at all? If Julia doesn’t unwrap the murderer’s true identity soon, one of the twelve days of Christmas could be her last . . .

My Thoughts on the Book
Nogged Off is a fun Christmas themed novella with a fast pace. Even though I had suspicion early on who the culprit was, the ending still had a bit of a surprise. Nevertheless, the book also has a lot of Christmas flair and I wouldn't mind some of the traditions mentioned in the book, such as the pajama breakfast/shopping.
jul krim leseeksemplar netgalley omtale roman