Review; Murder in the First Edition (Beyond the Page Bookstore Mystery #3) by Lauren Elliott 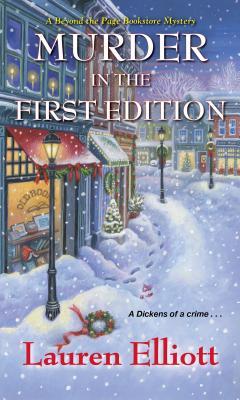 Last year I recieved an ARC of the cosy mystery Murder in the First Edition (Beyond the Page Bookstore Mystery #3) by Lauren Elliott through Netgalley. I read it shortly afterwards, but was unable to post my review until now as I had filled up December with Christmas books already. That means I'll post my review today instead.

Description from Goodreads
Addie Greyborne is preparing for the holidays at her bookstore in seaside New England--but a winter storm is coming, in more ways than one . . .

Addie's getting into the spirit for the upcoming Charity Auction--especially since she's got an 1843 copy of Charles Dickens's A Christmas Carol to donate. Her former colleagues at the Boston Public Library have confirmed that its worth runs toward the high five figures, which should help with the new pediatric wing. Her mood darkens, though, when a visitor from the past appears--Jonathan Hemingway, the father of her late fiancé. His presence stirs up sad memories for Addie, but also has her fuming when Jonathan, true to his womanizing ways, runs off for a lunchtime liaison with Teresa Lang, who's in charge of the auction.

Soon after, Addie heads to Teresa's office at the hospital--and finds the poor woman's dead body. What she doesn't find is her valuable first edition. What sort of Scrooge would steal from sick children and commit murder in the process? As a Nor'easter bears down and a mystery emerges about Jonathan's past, Addie must find out if she can appraise people's motives and characters as well as she can appraise rare books . . .

My Thoughts on the Book
Murder in the First Edition is a solid mystery with a bunch of clues and suspects which made it fun to read, although I had a guess at the murderer. Also, Addie drives me nuts at times due to her indecision about the two love interests (and don't even get me started on the love triangle trope I am pretty sick and tired of).