Review; Murder on the Moorland (A Kitt Hartley Yorkshire Mystery) by Helen Cox 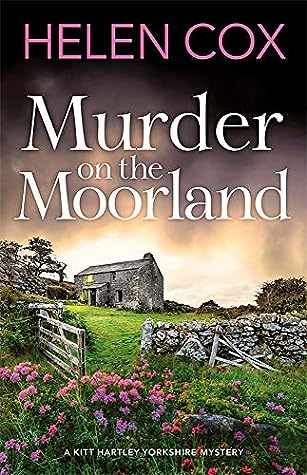 As I've read the two first books in the series about Kitt Hartley, I couldn't resist reading Murder on the Moorland by Helen Cox and today I'll post my review.
Description from Goodreads
Kitt Hartley wakes to the news that an murder has been committed in Irendale, a village high on the wild Yorkshire moors where her boyfriend, DI Malcolm Halloran lived with his ex-wife until she, too, was murdered. The MO of the two crimes is identical, right down to the runic symbols carved into the victims' hands.

Unable to leave it to the local police to solve, Kitt and Halloran travel to Irendale, where a literary mystery awaits. A line of Anglo-Saxon poetry found on the victim leads to a hiding place, and another cryptic clue. Did the victim know she was going to die? Is she trying to help solve her own murder from beyond the grave? And what is the connect to the murder of Halloran's wife all those years ago?

It will take the combined ingenuity of Kitt and Halloran, as well as Evie Bowes, Grace Edwards and, despite their best efforts, Ruby the (possible) psychic to solve this case. The moors may be beautiful, but they're not peaceful!
My Thoughts on the Book
It was fun returning to the series, especially watching the relationship between Kitt and Malcom develop. The plot has a few twists and turns to make it engaging, as well as a few red herrings thrown into the mix. The usual gang of Evie, Banks and Grace are there still, but a bit more sidelined than in the two previous books. There's still some funny moments in the book though, especially considering Kitt's literature-related comments from time to time.
Overall it was an enjoyable read.
krim omtale roman