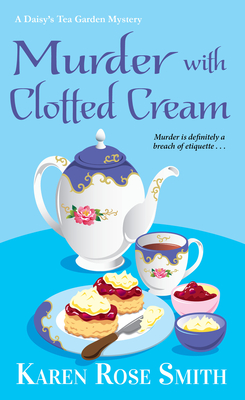 Last year I was fortunate enough to recieve an ARC of the cosy mystery Murder with Clotted Cream (Daisy's Tea Garden Mystery #5) by Karen Rose Smith through Netgalley. I read it shortly afterwards and today I'll post my review.

Description from Goodreads
A catering job has come in for Daisy's Tea Garden in Pennsylvania's Amish country--but death will be served before dessert . . .

Margaret Vaughn has hired Daisy to provide afternoon tea for her theater group. A local girl who left long ago for an acting career in New York, Margaret has returned home--with a multimillionaire husband in tow. But while Daisy bustles around Margaret's historic farmhouse, she senses that there's tension behind the scenes. Then she discovers the hostess on the floor of the pantry--dead and covered with clotted cream.

Barely recovered from her previous sleuthing adventure, Daisy joins forces with the former detective she's been dating to help solve the case. Should she cast suspicion on the stars of the upcoming play? Can Margaret's sister shine a spotlight on potential culprits? Or are there clues to be found in the victim's past? With plenty of family stress of her own to deal with, all Daisy knows is she better act fast . . .

My Thoughts on the Book
It's always fun to revisit this cosy mystery series and Murder with Clotted Dream didn't disappoint. I like Daisy's reluctancy in getting involved, in addition to the fact that the book highlights PTSD and post-partum depression. The characters in general is also well written, which is a bonus.
krim leseeksemplar netgalley omtale roman