Review; Still as Death (A Lucky Whiskey Mystery #2) by J. A. Kazimer 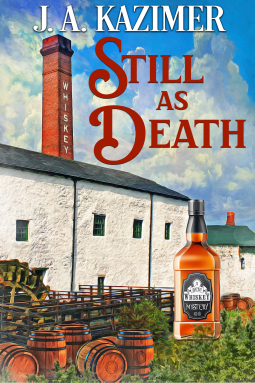 Last year I was fortunate enough to recieve an ARC of the cosy mystery Still as Death (A Lucky Whiskey Mystery #2) by J. A. Kazimer through Netgalley. I read it shortly afterwards and today I'll post my review.
Description from Goodreads
When it comes to murder, sometimes it’s better to be lucky than good . . .

When she’s not busy dodging the killer alligators and small-town gossip of Gett, Florida, Charlotte Lucky has her hands full keeping the family distillery up and running and planning her grandfather’s seventy-fifth birthday celebration. Then an arrogant old flame from her Hollywood days comes to town to woo her back with a proposal of marriage, and she rejects his offer with a burst of anger and no regrets—until the celebrity heartthrob is found murdered and she’s fingered as the main suspect.

Certain that the town’s sheriff—a member of the rival Gett clan—would be more than happy to see her hang for the crime, Charlotte gets to work tracking down the real killer. Navigating her way through family secrets and her own simmering romantic feelings for a man who’s as dangerous as he is charming, Charlotte will put her neck on the line to unravel a sinister scheme before her next drink turns out to be her last.
My Thoughts on the Book
Still as Death was an entertaining read with fleshed out characters and an interesting setting due to the whiskey distilleries, even if I suspect it's rare to find two whiskey distilleries in a small Florida town (if it was rural Kentucky, I think it would be more plausible). Still as Death has a faster pace than the first book in this series and I found it fun to read how the relationship between Brodie and Charlie developed.

It's an easy read and well suitable to read during the summer.
krim leseeksemplar netgalley omtale roman