Review; Beyond the Tracks by Michael Reit 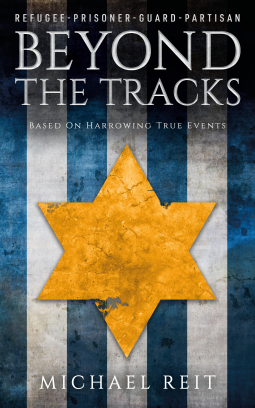 Last year I recieved an ARC of the historical novel Beyond the Tracks by Michael Reit through Netgalley. I read it shortly afterwards and today I'll post my review.
Description from Goodreads
Berlin, 1938
It’s no longer safe here.

When the Jewish families of Berlin start disappearing in nightly raids, 21-year-old Jacob Kagan knows it’s only a matter of time before the trucks come for him. Along with his family and best friend, he flees the country he’s always called home to find shelter in a Dutch refugee camp. Before long, the Netherlands falls to the Nazi war machine — Jacob’s new home is transformed into a transit camp with weekly trains bound for the horrors of the Eastern concentration camps.

Handpicked by the cruel new SS regime to police the camp’s Jewish population, Jacob has the opportunity to save his parents and best friend from the dreaded transport lists — but at what cost?

Based on true events, Beyond the Tracks is a redemptive story of unconditional loyalty and a will to survive impossible odds.
My Thoughts on the Book
It was really nice reading a book about a lesser known Dutch camp instead of the more famous ones in Eastern Europe, such as Sobibor and Auschwitz, even though a part of the book is at the latter. The book may seem a bit rushed at times and it has occasionally some stiff dialogue, but overall it's an interesting read about a dark chapter in European history.
historical fiction leseeksemplar netgalley omtale roman