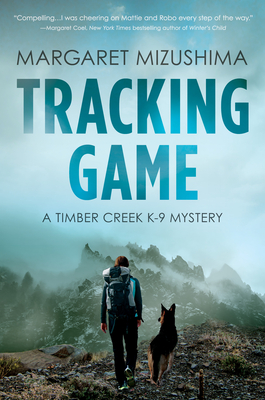 Last year I was fortunate enough to recieve an ARC of the crime novel Tracking Game (Timber Creek K-9 Mystery #5) by Margaret Mizushima through Netgalley. I read it shortly afterwards, but I haven't published my review until now.

Description from Goodreads
Two brutal murders, a menacing band of poachers, and a fearsome creature on the loose in the mountains plunge Mattie Cobb and her K-9 partner Robo into a sinister vortex.

An explosion outside a community dance sends Mattie Cobb and Cole Walker reeling into the night, where they discover a burning van and beside it the body of outfitter Nate Fletcher. But the explosion didn't kill Nate--it was two gunshots to the heart.

The investigation leads them to the home of rancher Doyle Redman, whose daughter is Nate's widow, and the object of one of their suspect's affection. But before they can make an arrest, they receive an emergency call from a man who's been shot in the mountains. Mattie and Robo rush to the scene, only to be confronted by the ominous growl of a wild predator.

As new players emerge on the scene, Mattie begins to understand the true danger that's enveloping Timber Creek. They journey into the cold, misty mountains to track the animal--but discover something even more deadly in Tracking Game, the fifth installment in Margaret Mizushima's Timber Creek K-9 mysteries.

My Thoughts on the Book
As I'm a huge German Shepherd lover, I couldn't resist this crime novel. I wish Robo was real, so I could give him some cuddles and treats.

Alright, jokes aside, I really liked this novel, not only because of Robo and the other animals. The plot has several twists and turns in addition to a nice pace which made it more interesting. I also liked several of the characters, such as Mattie and Cole, which were well developed and the setting of a smallish town in Colorado.

Additional stuff that made the book interesting was the topics of wildlife trafficking, child abuse and trauma.

In general I want to read more books in this series.