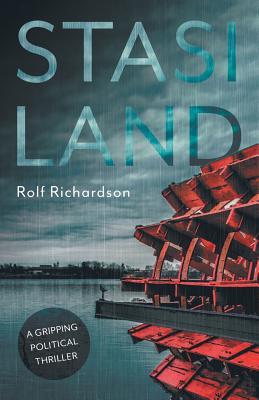 Last year I was fortunate enough to recieve an ARC from Netgalley of the novel Stasiland by Rolf Richardson. I read it shortly afterwards and today I'll post my review.

Description from Goodreads
After a messy divorce, Ed Blake is trying to forget the past by spending the summer driving around Europe in his silver Porsche. He gets no further than a small town on the river Elbe when he is arrested for a crime he did not commit.

Although in what is now a united Germany, this is the former Communist East, once ruled by the feared secret police, the Stasi. This is Stasiland. The past has not gone away, Germany's political tectonic plates are shifting, maybe heading for the sort of chaos last seen in the 1930s. Ed finds himself pulled into a whirlpool of violence as right-wing extremism starts to shake the foundations of Europe.

This is a novel about here and now. What happened to Ed Blake could happen to you.

My Thoughts on the Book
It was an interesting thriller with an okay pace and I loved that the novel points out that right-wing extremism is a bad thing (in which it is).
engelsk krim leseeksemplar netgalley roman thriller