Review; Death Comes to Dartmoor: A Merriweather and Royston Mystery by Vivian Conroy 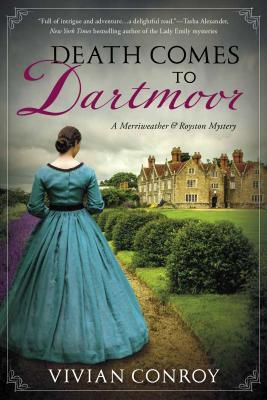 Last year I recieved an ARC of the crime novel Death Comes to Dartmoor: A Merriweather and Royston Mystery by Vivian Conroy through Netgalley. I read it shortly afterwards, but I haven't published my review until now.

Description from Goodreads
The mist-shrouded moors of Devon proffer a trove of delights for two vacationing zoologists--but also conceal a hoard of dark secrets reaching down to the fathomless depths of the ocean.
Miss Merula Merriweather barely saved her uncle from the gallows after he was wrongly accused of murder--and now, she's left the bustle of Victorian London to recuperate in the fresh air of Dartmoor with her fellow zoologist, Lord Raven Royston. The trip offers a unique treat, as they'll be staying with a friend of Raven's, who owns a collection of rare zoological specimens--including a kraken, a sea monster of myth and legend.

But all is not right in the land of tors, heaths, and mist. Their host's maid has vanished without a trace, and the townspeople hold him responsible, claiming that his specimens are alive and roam the moors at night, bringing death to anyone who crosses their path. Merula and Raven are skeptical--but the accusations become more ominous when they find several specimen jars empty.

As the two hunt for clues across a desolate and beautiful landscape, a stranger appears bearing a shadowy secret from Merula's past. Could there be a connection between her family history, the missing girl, and a fearsome monster that could be on the loose? The race is on to find the truth.

My Thoughts on the Book
Death Comes to Dartmoor was an okay read. I liked Merula and the subplot on who her real parents were, in addition to the fact that I had to guess to the very end who the murderer were. Aside from Merula, there were a couple of other likeable characters, but I really disliked Raven. What also frustrated me were the "Americanism" that sometimes showed up a bit, which didn't quite fit as the setting was in Dartmoor and some of the characters were a bit flat.

On a positive note, it was a well written plot and sometimes a bit atmospheric.