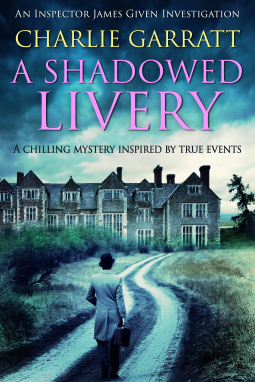 Last year I was fortunate enough to recieve an ARC of the crime novel A Shadowed Livery by Charlie Garratt through Netgalley. I read it shortly afterwards and today I'll post my review.

Description from Netgalley
War is on the horizon…

While Hitler and Chamberlain are preparing to sign the Munich agreement, the murderer of a Jewish shopkeeper is being hanged in Birmingham.

After witnessing the execution, Inspector James Given, who brought the killer to justice, is surprised to find he has been taken off the investigation to pursue something completely different.

Grovestock House, owned by the wealthy Barleigh family has witnessed a triple death. With the terrible events neatly written off as a murder and a double suicide, Given is supposed to tidy up a few loose ends with the help of local constable, John Sawyer.

But Given is sure there is more to the case than meets the eye.

What dark secrets were the Barleigh family hiding?

Could there be another killer involved?

And how will Given react when he is forced to confront the ghosts of his past…?

My Thoughts on the Book
A Shadowed Livery is a slow paced novel with some twists and turns, which made me guess until the end who was the killer. It's also well researched, considering the treatment of Jews.
krim leseeksemplar netgalley omtale roman