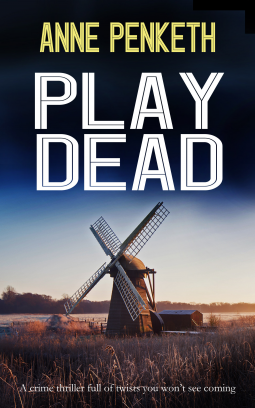 Last year I was fortunate enough to recieve an ARC of the crime novel Play Dead (DI Sam Clayton #3) by Anne Penketh through Netgalley. I read it shortly afterwards, but I haven't published my review until now as I wanted to focus on crime/mystery novels this month.

Description from Goodreads
A SLEEPY ENGLISH CITY IS ROCKED BY A SERIES OF MURDERS TARGETING MEMBERS OF THE LOCAL ORCHESTRA.

WHO IS KILLING OFF MUSICIANS WITH THEIR OWN INSTRUMENTS?

Detective Inspector Sam Clayton is called in to investigate three victims with ties to the Norfolk Festival Orchestra.

Musician Kristina Manning is impaled by her cello spike.

The disgraced conductor is found with his head stuffed into a piano. He’s on the brink of death.

A trumpeter dies, poisoned by his mouthpiece.

Will Clayton’s new girlfriend, Melissa, a singer in the NFO, be next on the murderer’s list?

Is there a serial killer with a musical edge on the loose? And what does the disappearance of former orchestra member Lauren Garner have to do with it?

My Thoughts on the Book
Play Dead has a steady pace with a few twists and turns to make it a bit more interesting. I liked Sam and a few of the other characters. It's not that often that one finds orchestras in crime novels, which made it more fun.
krim leseeksemplar netgalley omtale roman