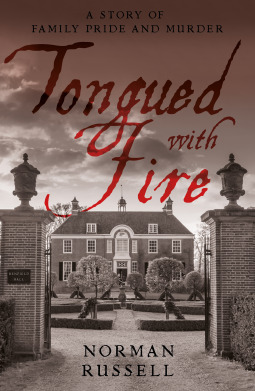 Last year I was fortunate enough to recieve an ARC of the crime/mystery novel Tongued With Fire by Norman Russell through Netgalley. I read it shortly afterwards, but I haven't published my review until now.

Description from Goodreads
Frank Renfield, Baron Renfield of Renfield Hall, will go to any lengths to preserve his noble heritage. Along with his fiercely determined wife Carole, he concocts a plan to marry their daughter to Karl Langer, a young American millionaire - a union that will solve all Frank’s urgent problems. Unfortunately for her parents, Jessica is in love with Alan Lavender, a handsome, but crude young man.

When Alan’s uncle is found murdered, suspicion immediately falls on Frank as a result of his uneasy relationship with the man. The Renfields throw a lavish birthday party for Carole, but the evening is tainted when Alan is killed and a young man shoots himself dead. And things take a sharp turn for the worse when another, unconnected, murder is laid at Frank’s door.

Can Frank prove his innocence? And will the murderer be caught before they strike again?

My Thoughts on the Book
I liked this novel a lot. The characters were well developed and the plot is engaging, with the added bonus of various strings to untangle and follow.
krim leseeksemplar netgalley omtale roman