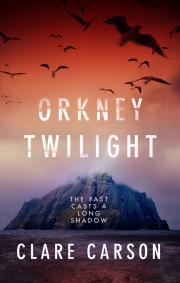 I came across the novel Orkney Twilight by Clare Carson on sale last year. Now I've read it and today I'll post my review of the book.

Description from Goodreads
Jim is an undercover policeman with alcohol issues and the gift of the gab - but he never talks about his past. His daughter Sam is a rebellious eighteen-year-old with an inquisitive streak. She is determined to find out the truth about her father.

On holiday in Orkney, beneath an endless midsummer sky, eighteen year old Sam shadows her father Jim as he runs secretive errands across the island. What did he take from the old watchtower on the edge of a cliff? Why is he so interested in Norse mythology? And why does Sam have the eerie feeling that she too is being shadowed? When Sam finally discovers the truth, it will draw her into a dangerous world of deception and double-dealing... and bring her closer to her dad than ever before.

Set between the eighties communes of south London, and the remote coastlines of Scotland, ORKNEY TWILIGHT is an original, haunting thriller about fathers, daughters and the ghosts of the past.

My Thoughts On The Book
Orkney Twilight was a fun and entertaining read, but for me it was a bit so-so in terms of the suspense, at least in the majority of the book. I'm not saying it is poorly written though, as the author makes use of descriptions and the weather to set the mood and I also really liked Sam.
engelsk krim omtale roman thriller