Review; A Vindication of the Rights of Woman by Mary Wollstonecraft 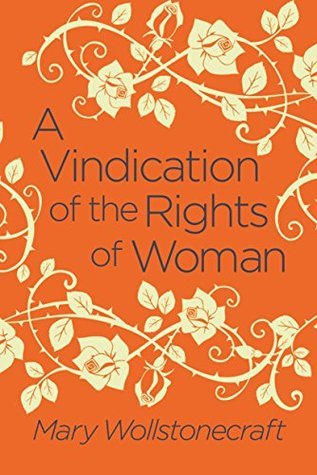 With both Platypire Diversity Challenge (Women History Month) and Back to the Classics Challenge (A classic by a woman author), I ended up reading A Vindication of the Rights of Woman by Mary Wollstonecraft. Today I'lll post the review.

Description from Goodreads
Writing in an age when the call for the rights of man had brought revolution to America and France, Mary Wollstonecraft produced her own declaration of female independence in 1792. Passionate and forthright, A Vindication of the Rights of Woman attacked the prevailing view of docile, decorative femininity, and instead laid out the principles of emancipation: an equal education for girls and boys, an end to prejudice, and for women to become defined by their profession, not their partner. Mary Wollstonecraft's work was received with a mixture of admiration and outrage - Walpole called her 'a hyena in petticoats' - yet it established her as the mother of modern feminism.

My Thoughts On The Book
Even though it is a major piece within feminist literature, I honestly struggled reading it due to the late 1700's language. She also seems a bit obsessed with Rousseau. Luckily Mary Wollstonecraft gets her point across (at least occasionally) and she was a bit ahead of her time. No offense to Mary Wollstonecraft, but I do prefer her daughter's well known classic (yes, Mary Shelley, who wrote Frankenstein, is her daughter).
back to the classics engelsk faglitteratur omtale platypire diversity challenge