Book Blitz; Sympath (The Sentinels of Eden #3) by Carolyn Denman 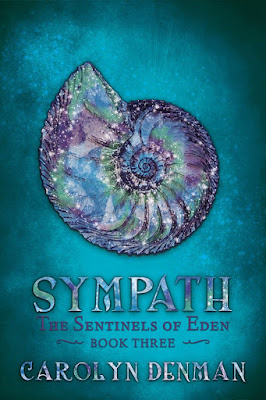 Sympath (The Sentinels of Eden #3)

Annie has grown up knowing she is destined to meet her soul mate. He will always remain close to her. He will always know exactly where she is, and how she’s feeling. He’ll guard and protect her. At least, until she produces the next heir to her Cherubim line.

There has to be a way to avoid this supernatural stalker. And she is not a prize-winning ewe.

Determined to find her own identity before becoming bonded to her Guardian, Annie does everything she can to keep him at a distance – until her partner Cherub, Harry, dredges up the mystery of his parents’ deaths and triggers unwanted attention from an organised crime syndicate. Now all three of them need to do whatever it takes to save Harry’s farm, solve the mystery of the missing ruby necklace, and keep anyone from finding the hidden Paradise it came from.

Previous Books in the Series (click on images for Goodreads link):

No History To Speak Of

A teaser to Sympath – Sentinels of Eden #3 by Carolyn Denman

The envelope fell to the floor, ignored in favour of its contents. George Durante let his eyes blur, feeling his heart thud against his ribs, but when he focussed his vision again, the numbers on the letter in front of him hadn’t changed. Must be a mistake. Too many digits. He opened the locked file behind the till, flicking through the files to ‘D’ and drew out the valuation certificate he’d arranged weeks ago. Fingers that had been trained to remain steady while setting the tiniest of jewels, trembled just a little as he laid the certificate next to the letter on the counter. His cousin’s signature embellished the certificate with inked promise, clearly stating that the gemstone was worth $28,400. Jimmy had never been wrong or unreliable with his valuations. George trusted him. That figure seemed right for a ruby of that size and clarity, and the client had been very tempted to part with it for that price, although she had denied it, and left his shop muttering that she would never sell her husband’s wedding gift. He was not one to push, and after eleven years of working in Nalong, he knew he didn’t need to. Mrs Doolan would be back once the bank sent another foreclosure notice for her farm.
She’d need a lot more than $28,400 to solve their financial problems though, which was why George had asked his cousin to send out a few extra enquiries. He’d hoped that some of his family contacts might have yielded a better offer for her. If he could find a buyer willing to pay a bit extra for the gem, she might just be able to tip the balance with the bank. Just enough to hold them off for another season. Just long enough for the rains to return.
The ruby was stunning. It had been a joy to work with when Geoff Doolan had brought it to him eight years earlier. George had polished the stone, bringing out its deep crimson shine the way blood returns to chilled fingers when you rub warmth back into them. And the setting Geoff had requested suited it perfectly. A heart-shaped 8.17 carat ruby, just under 12mm diameter, cradled by golden angel’s wings – the ideal wedding gift for a girl named Ruby. The piece was pretty enough to sell for well above its value if he found the right buyer, and according to the letter he’d just received, it had apparently attracted someone’s attention.
George picked up the typed, unsigned letter again and almost lowered his magnifying glasses from his forehead to examine it, as if he could pick out the flaw by staring at the ink more closely. His extended family in Melbourne had some…dubious contacts. Could he trust this? Celarsi Holdings. Never heard the name before, but he also knew better than to pry into it. If they wanted to offer that much for the necklace, then he should do his job and arrange the transaction. Just how much of a cut should he take? The valuation certificate was genuine, as far as he could tell. Jimmy wouldn’t risk his reputation by faking it, but it had taken longer than expected to receive it. Had the gem been sent for a second opinion? If so, he hadn’t been advised of the result – no, he couldn’t think too hard about those implications. Ruby Doolan wouldn’t know how much he was selling it on for. He genuinely wanted to help her, but this was business, and there was nothing legally wrong with buying her jewellery at whatever price she was willing to agree to. If some rich lady had fallen in love with the necklace after seeing the photos he’d sent, and wanted to play games with her husband’s money, that was not for him to judge.
His hand hovered over the receiver for a few seconds before he picked it up and dialled.
‘Hello, Ruby Doolan? This is George from Durante Diamonds. I’ve been thinking about your situation and I’d like to help. I’ve been studying the current market and I believe I’m in a position to be able to offer you a slightly better price than the certified valuation. Is there a convenient time we can meet to discuss it?’ 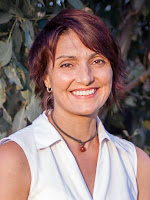 About the Author
Carolyn lives on a hobby farm on the outskirts of Melbourne with her husband, two daughters, and her parents. The fact that she always has at least three of her pets following her around at any one time in no way means that she is the fairest in the land. They probably just like her taste in music.
As well as writing stories for Aurealis and Andromeda Spaceways magazines, Carolyn is also the author of the YA Australian fantasy series The Sentinels of Eden.