Thanks to YA Bound Book Tours, I got the chance to read Sparrow Squadron by Darius Jung and today I'll post the review of the book. 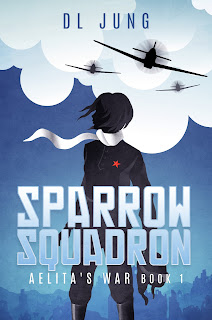 Description from Goodreads
"There was a time when flying didn't mean looking over my shoulder for death coming at me."

Escaping her hometown ahead of the Nazis, 16-year-old Aelya Makarova seizes a chance to live her dream. Obsessed with flying, she joins a women's fighter squadron to defend her homeland against the invaders. She'll go faster and higher than she's ever gone before.

But the harsh reality of Air Force life shatters her expectations and forces her to grow up fast. The squadron is split by petty rivalries, male pilots treat them like a joke, and the ideal country she thought she was fighting for doesn't really exist.
Finally given a chance to prove herself in battle, Aelya is pushed to breaking point. With all her talent, the help of her comrades, and a lot of luck, she might just make it through. But will there be anything left of her humanity?

With fast-paced action and a heart-rending mix of humour and tragedy, Sparrow Squadron is an adventure novel for young adults that brings an overlooked episode of history to life.

My Thoughts On The Book
Sparrow Squadron was a fun book to read, especially considering the fact that a lot of the historical fiction related to combat focuses on the male soldiers. Even though it's fiction, there are still some real elements in this book, like the Stukas, Messerschmitt BF 109's and some of the events mentioned, like the the Battle of Stalingrad.