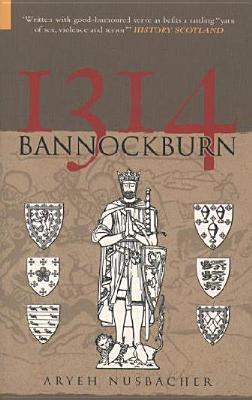 As I'm a fan of the historian Lynette Nusbacher, I couldn't resist buying her book Bannockburn 1314. I ended up reading it shortly after I recieved it and today I'll post my review.
Description from Goodreads
Recent scholarship has illuminated one of the most exciting battles of Scottish history, showing it to be as historically significant as it was romantic and bloody. This book carries the reader through the politics and plans of a military campaign of the Middle Ages. Using recent studies on weapons, warfare, and Scottish history, as well as sound archival sources, this book opens the files on a year's preparation for a massive English invasion of Scotland. In addition to the heroic legends, Bannockburn 1314 examines the common soldiers summoned to war and the knights who fought near them.
My Thoughts on the Book
Bannockburn 1314 gives a nice overview of the battle of Bannockburn, as well as a lot of information and details, whether it's concepts such as schiltrons versus cavalry, tactics and the psychology of battle or other other topics, such as weaponology (don't even get me started on the bows used in archery and the Road Runner reference). Lynette Nusbacher's writing style is also a bit point-blank without sugarcoating things as well as witty and humorous at times, which I think is a good thing, as some historians tend to be a bit dry to say it the least. An added bonus was that in the beginning some chapters, a few lines from King Henry V by William Shakespeare was included.
faglitteratur historie omtale