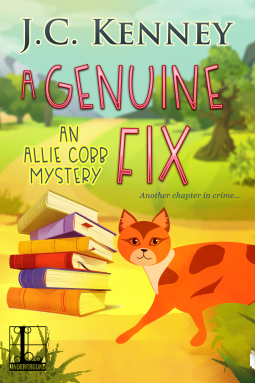 Earlier this year I recieved an ARC of the cosy mystery A Genuine Fix by J. C. Kenney through Netgalley. I read it shortly afterwards and today I'll post my review.

Running the family literary business while preparing for her best friend’s wedding, chairing a park planning committee, and getting her rescue cat to bond with her boyfriend’s golden retriever doesn’t leave Allie Cobb much time for crime-solving. But when the guy who stood her up the night of her high school senior prom is killed and dumped in a pile of mulch, Allie’s suddenly the prime suspect.

It’s insulting enough that gambler, drunk, and all-around lowlife Georgie Alonso was found on the site of the memorial park honoring Allie’s deceased father. Now she’s fighting to clear her name and hold off a rush to judgment. But politics, decades-old secrets, and a slew of high-profile suspects make dangerous bedfellows as the eve of the park’s grand opening draws nearer. She’ll have to nab a killer soon, before her storybook life gets a bad ending …

My Thoughts on the Book
A Genuine Fix is the typical cosy mystery where the protagonist gets herself into trouble and in general do some sleuthing. It doesn't stand out from the rest, but I liked the descriptions in the book as well as the cat and the literary agent theme.
krim leseeksemplar netgalley omtale roman