Review; And Then They Were Doomed: A Little Library Mystery by Elizabeth Kane Buzzelli 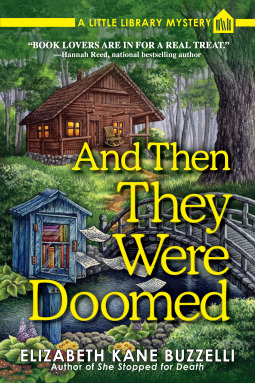 Earlier this year I was fortunate enough to recieve an ARC of the cosy mystery novel And Then They Were Doomed: A Little Library Mystery by Elizabeth Kane Buzzelli through Netgalley. I read it shortly afterwards and today I'll post my review.

Description from Goodreads
Zoe Zola is one of ten invitees to an Agatha Christie symposium. Tempers flare…and then there are nine. Can Jenny Weston save Zoe from murder on the Upper Peninsula?

Little Person author Zoe Zola believes that one of the unluckiest things in life is to receive an invitation—in the form of a letter edged in black—to an Agatha Christie symposium at an old Upper Peninsula hunting lodge. Her reluctance dissipates when she learns that the organizer is named Emily Brent—the name of a character poisoned by cyanide in Christie’s And Then There Were None.

As a dreary rain soaks the U.P., Zoe and nine other Christie scholars—each of whom bears a vague resemblance to one of the classic mystery novel’s characters—arrive at the lodge. At the opening night dinner, arguments flare over the experts’ discordant theories about Christie. Next morning, the guests find one particularly odious man has gone—whereabouts and reasons unknown. Such a coincidental resemblance to a work of fiction is surely impossible; therefore, it appears to be possible.

As the guests disappear, one by one, Zoe resolves to beat a hasty retreat—but her car won't start. She calls her friend, amateur sleuth/little librarian Jenny Weston, but Jenny will have to wait out a storm off Lake Superior before she can come to the rescue. If Zoe’s to stay alive to greet Jenny when she eventually arrives, she’ll have to draw on everything she knows about Agatha Christie’s devilish plots in Elizabeth Kane Buzzelli’s fourth tantalizing Little Library mystery.

My Thoughts on the Book
And Then They Were Doomed had a slow start, but it caught up after a while. It was also not the average cosy mystery with a fresh body and a related murder investigation. What I really liked about the book is Liz as a main character, especially as she was a Little Person and didn't put up with the crap and comments about being one. Another thing I really liked was the tribute to Agatha Christie in this book, especially And Then They Were None and Murder on the Orient Express.
krim leseeksemplar netgalley omtale roman