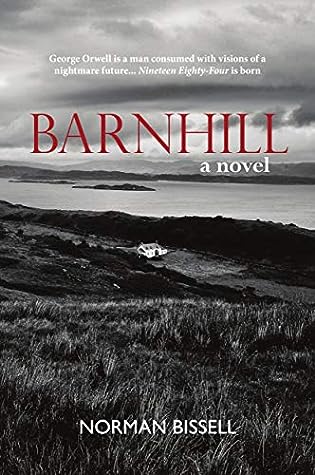 A few months ago I recieved an ARC of the novel Barnhill by Norman Bissell through Netgalley. I read it shortly afterwards and today I'll post my review.

Description from Goodreads
George Orwell left post-war London for Barnhill, a remote farmhouse on the Isle of Jura, to write what became Nineteen Eighty-Four. He was driven by a passionate desire to undermine the enemies of democracy and make plain the dangers of dictatorship, surveillance, doublethink and censorship.

Typing away in his damp bedroom overlooking the garden he created and the sea beyond, he invented Big Brother, Thought Police, Newspeak and Room 101 – and created a masterpiece.

Barnhill tells the dramatic story of this crucial period of Orwell's life. Deeply researched, it reveals the private man behind the celebrated public figure – his turbulent love life, his devotion to his baby son and his declining health as he struggled to deliver his dystopian warning to the world.


"He sometimes thought that the world might be a better place if the humans were behind bars and the animals were allowed to roam freely. They wouldn't be at war for one thing."

My Thoughts on the Book
Barnhill was a grim and intriguing novelization of the later years of George Orwell. As a lot of people, I've heard a lot about his books (and read them of course), but I knew very little about his life. Even though this book is fiction, I would assume that the bottom-line holds some truth to it. Nevertheless, it's an interesting, though a bit grim, novel.
historical fiction historical fiction challenge leseeksemplar netgalley omtale roman