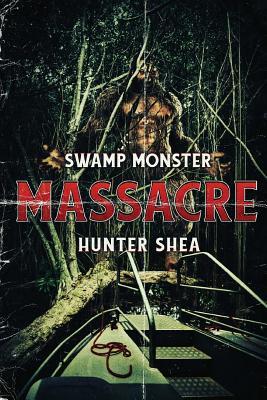 After watching quite a few episodes of Finding Bigfoot and in general being interested in the whole Bigfoot-thing, I couldn't resist the horror novel Swamp Monster Massacre by Shea Hunter. I've finally read it and today I'll post my review.
Description from Goodreads
The swamp belongs to them. Humans are only prey. Deep in the overgrown swamps of Florida, where humans rarely dare to enter, lives a race of creatures long thought to be only the stuff of legend. They walk upright but are stronger, taller and more brutal than any man. And when a small boat of tourists, held captive by a fleeing criminal, accidentally kills one of the swamp dwellers' young, the creatures are filled with a terrifyingly human emotion-a merciless lust for vengeance that will paint the trees red with blood.
My Thoughts on the Book
Swamp Monster Massacre is a short and fast paced gory horror novel. It may not be for the faint hearted, especially as there's some fairly grusome scenes though. The book also plays a bit on the trope of a group of people (some of them young) stuck in a situation where "something" or "someone" is chasing them. It's still a fairly engaging horror novel and at least I wanted to know what happened next and who survived the ordeal.
omtale roman skrekk