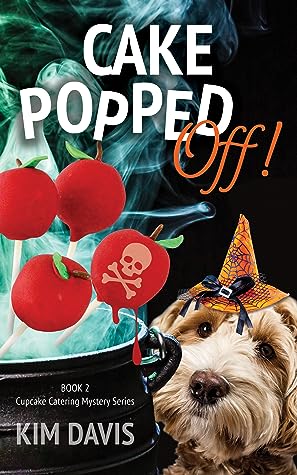 Last year I was fortunate enough to recieve an ARC of the cosy mystery Cake Popped Off (Cupcake Catering Mystery Book 2) by Kim Davis through Netgalley. I read it shortly afterwards and today I'll post my review.
Description from Goodreads
Cupcake caterer Emory Martinez is hosting a Halloween bash alongside her octogenarian employer, Tillie. With guests dressed in elaborate costumes, the band is rocking, the cocktails are flowing, and tempers are flaring when the hired Bavarian Barmaid tries to hook a rich, hapless husband. Except one of her targets happens to be Emory’s brother-in-law, which bodes ill for his pregnant wife. When Emory tracks down the distraught barmaid, instead of finding the young woman in tears, she finds her dead. Can she explain to the new detective on the scene why the Bavarian Barmaid was murdered in Emory’s bathtub with Emory’s Poison Apple Cake Pops stuffed into her mouth?

With an angry pregnant sister to contend with, she promises to clear her brother-in-law’s name. As Emory starts asking questions and tracking down the identity of the costumed guests, she finds reasons to suspect her brother-in-law has been hiding a guilty secret. Her search leads her to a web of blackmail and betrayal amongst the posh setting of the local country club crowd. Can Emory sift through the lies she’s being told and find the killer? She’ll need to step up her investigation before another victim is sent to the great pumpkin patch in the sky.

Includes spooky Halloween recipes!
My Thoughts on the Book
Cake Popped Off! was a fun and engaging cosy mystery with several likeable and relatable characters, in addition to a well crafted mystery that kept me guessing until the end. I loved the friendship between Emory and Tillie, even with their age gap.

Overall, it was an enjoyable read with the added bonus of recipes in the back.