Review; Magic Words - From the Ancient Oral Tradition of the Inuit by Edward Field 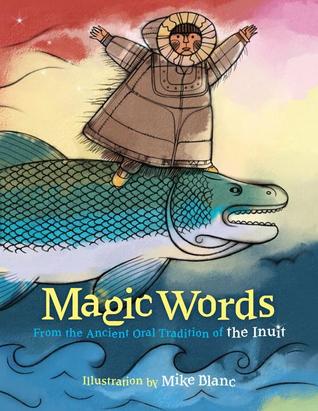 A while ago I was fortunate enough to recieve a digital press copy of the picture book Magic Words - From the Ancient Oral Tradition of the Inuit by Edward Field through Netgalley. As it fitted into the 2019 Diversity Reading Challenge, I read it and now it's time for the review.

Description from Goodreads
Magic Words describes a world where humans and animals share bodies and
languages, where the world of the imagination mixes easily with the physical. It
began as a story that told how the Inuit people came to be and became a legend
passed from generation to generation. In translation it grew from myth to poem.
The text comes from expedition notes recorded by Danish explorer Knud
Rasmussen in 1921. Edward Field got a copy from the Harvard Library and
translated it into English.

My Thoughts on the Book
Magic Words was an enjoyable and whimsical read. In a sense it was the illustrations which made this story come alive, but I wish both the illustrator and the author had been Inuts, as they would probably have been more familiar with the story. Not everything can easily "just be translated" from one language to another.
2019 diversity reading challenge bildebok leseeksemplar netgalley omtale