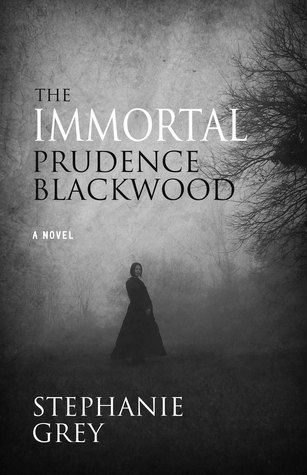 Earlier this year I was fortunate enough to recieve an ARC of the novel The Immortal Prudence Blackwood by Stephanie Grey through Netgalley. I read the book shortly afterwards and today I'll post my review.

Throughout history, the world has witnessed cruel, gruesome, and twisted murders at the hands of the most notorious serial killers. For those who were never caught—Jack the Ripper, the Atlanta Ripper, and the Cleveland Torso Murderer—their crimes will live on in infamy as their identities are forever chased, but never revealed.

It’s 1947 in Washington, D.C. and a dangerous murderer has boldly discarded two headless bodies nearby the White House and the Jefferson Memorial. With no leads, Detective Clive O’Reilly is feeling desperate. When a stranger convinces O’Reilly to join him at a local pub, he is treated to a wild tale about Prudence Blackwood, an immortal who seeks vengeance for those murdered by history’s most notorious serial killers.

Initially in disbelief over her existence, O’Reilly is surprised to discover that she’s very real and she’ll be assisting in the investigation.

But Prudence has unorthodox methods. With the body count rising, O’Riley will have to find a way to work with her to stop the most brutal killer in D.C.’s history before more victims are added to the list.

My Thoughts on the Book
Prucence is a badass woman for sure and proves that not all heroes wear capes. It's a captivating read, although I would love a bit more backstory for both Prudence and a few of the other characters in the book.