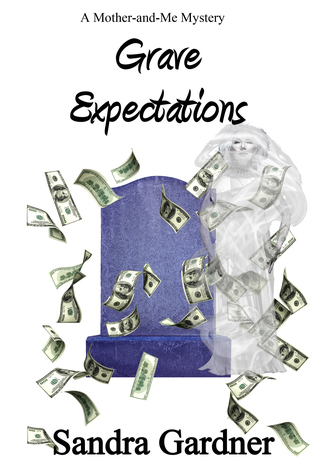 It's time for another book review for Mystery Thriller Week. This time it is Grave Expectations by Sandra Gardner and I was lucky enough to recieve a digital press copy from the author.

Description from Goodreads
When Marabella Vinegar’s favorite neighbor, Sam Lipschitz, dies, everyone, including the NYPD, thinks it was natural causes. After all, Sam was pushing eighty, with a heart condition. But Marabella knows Sam’s heart problem was mild and under control with medication—and she’s already acquainted with Sam’s greedy relatives—so she doesn’t think there was anything natural about it. Neither does her sleuthing sidekick, her mother-the-ghost-detective, who has recently dropped back into Marabella’s life, happy to interfere again. Not only that, but Rose, another elderly neighbor, tells Marabella she overheard Sam arguing with someone in his apartment about money, and was threatening to change his will. Rose caught a shadowy glimpse of the person fleeing Sam’s apartment and is worried the person saw her. The next day, Marabella finds Rose, severely injured, on the floor of the building’s laundry room, saying she was pushed. Marabella can’t convince her old nemesis, NYPD Detective, now Lieutenant, Rivera, that people are being murdered. So she vows to track the killer down with her mother’s help, by investigating the heirs to Sam’s considerable estate. Can she and her mother find the killer and get enough evidence to convince Rivera? Or is Marabella doomed to become the next victim?

My Thoughts on the Book
Even though this is a cozy mystery novel, I had a good laugh at times, especially because of the cat. The characters are three dimensional and realistic, and the book itself is well-paced.
krim leseeksemplar mystery thriller week omtale roman