Review; The Jacq of Spades by Patricia Loofbourrow 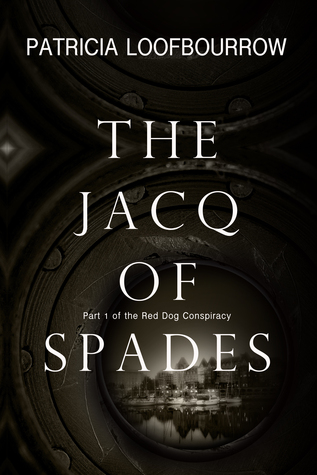 Mystery Thriller Week isn't over quite yet. I've read The Jacq of Spades by Patricia Loofbourrow for this occasion and today I will post my review of the book. I was also lucky enough to recieve a digital copy of this book from the author.

Description from Goodreads
The once-beautiful domed neo-Victorian city of Bridges is split between four crime families in an uneasy cease-fire. Social disparity increasing and its steam-driven infrastructure failing, a new faction is on the rise: the Red Dogs.

Jacqueline Spadros has a dream life: a wealthy husband, a powerful family. But her life is not what it seems. Kidnapped from her mother's brothel and forced to marry, the murder of her best friend Air ten years before haunts her nightmares. She finds moments of freedom in a small-time private eye business, which she hides in fear of her sadistic father-in-law.

Air's little brother disappears off his back porch and the Red Dogs are framed for it. With the help of a mysterious gentleman investigator hired by the Red Dogs to learn the truth, Jacqui pushes her abilities to their limits in hope of rescuing the child before the kidnapper disposes of him.

My Thoughts on the Book
I haven't read that many steampunk crime/mystery novels yet, but as I love both steampunk and crime, I really liked this book. Even as this is a steampunk, it doesn't go overboard in describing technical down to each and every nut and bolt, which made it easy to read. The book also plays a bit with the mob/gangster family trope, but what I enjoyed the most was that it had a female protagonist. Due to having a female protagonist, The Jacq of Spades also shows just how vunerable women could be in the 1800's as the setting is in that century.

So if you want to read an entertaining steampunk crime/mystery, I would recommend this book. At the moment I'm tempted to read the rest of the series.
krim leseeksemplar mystery thriller week roman