Review; Death of a Christmas Caterer by Lee Hollis 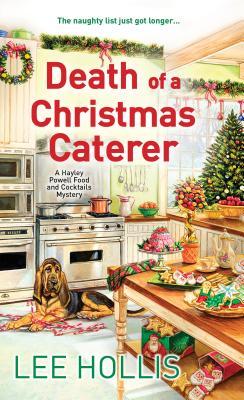 I am not going to deny that I've got a weak spot for cosy mysteries. Recently I've read Death of a Christmas Caterer by Lee Hollis and today I'll post the review.

Description from Goodreads
Who better than food and cocktails columnist Hayley Powell to book a caterer for the Island Times holiday party? But Hayley's quest for a cook turns into the pursuit of a killer who caters to no one. . .

Office Christmas parties can sometimes mean career suicide--but they rarely lead to murder. Hayley thought Garth Rawlings would be the perfect caterer for this year's bash, but when the gourmet sees her budget, he goes galloping.

Unfortunately his run is short-lived. Garth is found dead on the floor of his kitchen, with his delectable creations burning in the oven. Faced with a spread of suspects, Hayley is determined to discover who would want to take out the Christmas caterer, because--no matter what the season--justice must be served. . .

My Thoughts on the Book
It was a fun read, even though I at times got a bit frustrated with some of the characters. Like, at the Christmas office party, where at one point a co-worker forces himself on Haley while inebriated. She later says, "we all do things we didn't mean when under the influence. No one will even remember this in two weeks." How on Earth can one justify such a comment in this era? Seriously?
cloak and dagger mystery challenge engelsk jul krim roman