For nineteen years, I was just an ordinary Californian guy. Until a car crash almost killed me, and Count Dracula suddenly stuck his teeth into my throat. As his great-grandnephew and rightful heir, he ships me off to freaking Transylvania to learn how to be a vampire the hard way: with no staff to eat, no chance to escape, and no Wi-Fi. It’s just the place to go mental. And starve.

But there’s this girl. Abigail… For some reason, she likes to roam the dark and musty castle. She claims to know nothing about vampires, but I swear she tries to kill me every damn time we meet. I would have invited her to be my dinner last night if she hadn’t fled with something very dear to me. My fang.

Now, I’m waiting for sundown to find her and get my tooth back. And then I’ll kill the werewolf that howls in the forest, because that’s actually the one condition under which Uncle Vlad allows me to return home.

But the wolf problem is harder to solve than expected. And Abigail’s cookie-like scent is making me do really stupid things…

And check out the new trailer: https://www.youtube.com/watch?v=LVYCtXAZ3AM&feature=youtu.be 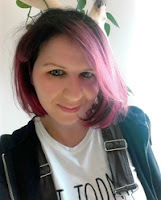 Anna Katmore grew up in Vienna – not by free will but because her parents decided to move there when she was only 4 years old. She hated the city, everything about it. So right after graduation, she moved back to the country side where she settled down with a nice husband and an awesome laptop. (The laptop came first!)

She’s been a storyteller all her life. Already in kindergarten, she came up with the most exotic fantasies and tales. Her teacher back then called her a liar. Today, Anna calls it the cornerstone of her writing career.

People always told her: you can’t make a living with being an author. After her first novella PLAY WITH ME came out and shot straight to the stars within the first week, she knew she could do anything if only she never stopped dreaming.

That’s also part of what she teaches her sutdents in writing workshops today. Always dream big! If your dreams don’t scare you, they aren’t big enough.