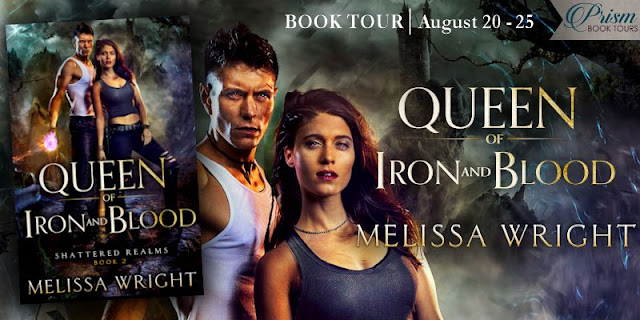 Queen of Iron and Blood
By Melissa Wright

We hope you enjoyed the tour! If you missed any of the stops
you can see snippets, as well as the link to each full post, below:


Launch - Note from the Author

Welcome to the tour for Queen of Iron and Blood, book two in the Shattered Realms series! It was a thrill to continue the story of plucky heroine Mackenzie Scott, her younger brother Riley, and the complicated creatures who invaded their world...

It's All About the Romance - Excerpt

A black-winged bird slammed into the glass inches from Hannah’s face, the noise making her fingers tighten around the stock of her M4. She wanted to turn away from the window, from the disingenuousness of that promising sky, and cross the darkened room. But Hannah was on watch. She straightened, eyes narrowed against the light of a hidden sun, and another bird smacked into the glass with a dull thud.

"Wright has a true gift for telling compelling stories with intriguing characters. Shattered Realms is no exception. In many ways, this may be my favorite story she's told to date. With enough stakes and action to keep you guessing, this is the fairypocalypse amalgamation dystopian fans didn't know they were missing."

Hannah pulled the gun up to her shoulder, leaving a good ten feet between her and that glass.
She’d never wanted to join the army. She never would have.

Now she didn’t have a choice...

Declarations of a Fangirl - Excerpt

“Captain!” she yelled a third time, irritation clear in her voice as she pushed her helmet away from her brow. The captain came up behind her, finally, his boots muted against the damp concrete floor.

He shifted, coming into her peripheral as two more bodies slammed against the glass. He nodded. “It’s happening at East Creek, too. Nothing to be alarmed about.”

My Life, Loves and Passion - Review

"I loved how it was written. You can actually picture the scenes as you read them. You feel like you are right there breathing the air, feeling the anxiety.

I am definitely going to reading more by this author."

What types of plants, animals, or sentient races might we encounter in the dying lands that we don’t see on Earth?

The Iron Bound are a race of chimeras, each varied and unique, though many resemble a patchwork of creatures akin to those on Earth. In addition to stealing this realm’s energy, the Iron Bound also bring over flora, which transforms into something otherworldly when exposed to the dying lands power.

Weeks after the original invasion, after the Breach and all that followed, Hannah had been in one of the trucks sent to ground zero. She had known the other soldiers for only a matter of days, but they were not easy days. She and a seventeen-year-old redhead named Riley had become close. She’d relied on him, she realized later, in a way she’d never meant to. And when Riley had told her what happened, when it had turned out he needed her, Hannah could not keep herself from promising she would help. She didn’t think she regretted it, but it was hard to be sure.

"QUEEN OF IRON AND BLOOD is another thrilling adventure as war continues between two realms, risking not only humanity on earth but also those who live in the other realm. Non-stop action, endearing and fierce characters, and an uphill battle with everything at risk makes for an engaging story from start to finish. A fantastic sequel that will leave readers hoping for more to come in this magical world! . . . I enjoyed every single minute."

Her fingers tightened around the M4 at the memory. She’d never shot a man before, but her mother and father had shown her how it was done. She had hit a target enough to know she’d aimed correctly. But the bullet had missed. Hunter, that being from a hole in the sky, had curved its trajectory around him. Her gun was useless, she knew it, and yet Hannah stood in this darkened room and gripped it like it was the end of the world. Because it was the end of the world.

Reading On The Edge - Excerpt

She hadn’t told them about, Hunter, who had brought them to safety before he’d opened the gate. She hadn’t told them about how he’d saved Hannah and the others, how he’d gotten countless men to run and hide and stay safely out of the way. The creature had brought them here, behind the shelter of this reinforced glass, his eyes glowing with a light so blue that each of them could see it was unnatural, and they’d been so terrified they’d followed him anyway. No one had included it in their report. Hannah didn’t know if it was because the creature had saved them...

Getting Your Read On - Excerpt

Riley had kept the wound a secret, hidden from everyone so he could join the troops and fight. But when the gateway started to pull, she’d seen him moving toward it, trying to leave the safety of their shelter. She’d misunderstood at first, thought he’d been going after his sister, to help her escape the storm. Hannah’s fingers had clawed into Riley’s shirt as he fought her, tearing the material to reveal a duct-tape-covered arm. It had been hot, buzzing, and suddenly she’d known what he’d been hiding all along. Riley had been Marked.

“I remember thinking, ‘This is it,’” she told her captain. “‘This is where they drop the bomb. Where we all die.’” She swallowed hard, waiting for the next bird to hit the glass like a child counting the seconds between lightning and thunder. It didn’t come.

For one brief moment, there had been pure hope. Rejoice. Relief. Weeping. An effort to regroup.

And then came the attacks. Systematic. Orderly. Pointed. They hit strategic targets: power plants, tech firms, supply routes. It was the worst thing they could imagine, the scariest turn of events. These were not the initial attacks. The monsters weren’t merely beasts playing with their prey. This was intelligent. Deliberate.

“Captain,” Hannah asked, “what do you think happened to them?”

She didn’t have to say it. The Marked had been heavy on the minds of everyone since the first night: why had they been chosen? Were they picked at random, just to die? Once they’d been taken through the gateway, it was clear it wasn’t anything like rapture. It had been an otherworldly hole in the sky, gaping and huge and glittering like stardust. Not heaven. Not angels.

A void. And monsters.

Don't forget to enter the giveaway below, if you haven't already... 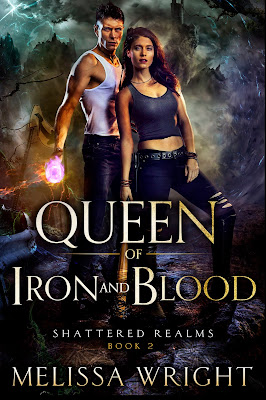 The storm was only the beginning…

Mackenzie Scott is trapped in another realm, but that’s the least of her problems. Magic runs through her veins, and even now she can feel herself changing. She’s managed to help her brother, but in exchange, she’s turning into one of them. Worse, Mackenzie’s not just a monster. She’s their queen.

Separated by realms, Mackenzie and Hunter must save the other’s world. But the divide isn’t the only thing working against them. Beasts and men fight a dangerous battle that pits Hunter and Mackenzie against those they’re trying to protect.

And the clock is ticking.

Other Books in the Series

When flying monsters break through the veil into her world, Mackenzie Scott has nothing left to lose. Her brother has been taken, her future has vanished, and all that remains is a desperate need for revenge. After discovering the breach the creatures used as a gateway, Mackenzie devises a plan to stop them, whatever the cost.

When she finds an injured stranger in the street, he just might be the key she needs to succeed. What Mackenzie doesn't know is that this stranger isn't the helpless boy he appears to be. He's one of the monsters. And he's got plans of his own.

Thrown into a dying city in another realm, Mackenzie is powerless to get back. With the gateway closing, time is not on her side. But the stranger is, and if they can escape execution, this girl and her monster might be able to save both their worlds.


Grab an ebook of the first book in the series for FREE!
Goodreads│Amazon│Barnes & Noble│Kobo│iBooks

Melissa Wright is the author of the Frey Saga, Descendants Series, and Shattered Realms Series. She is currently working on the next book, but when not writing can be found collecting the things she loves at Goodreads and Pinterest. Contact her through the web at www.melissa-wright.com. 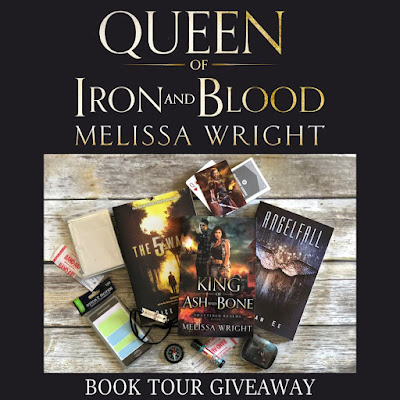 1 winner will receive an awesome prize pack with "survival" gear: print copies of The 5th Wave by Rick Yancey, Angelfall by Susan Ee, and King of Ash and Bone by Melissa Wright, plus Be Your Own Hero bracelet, lip balm, compass, playing cards, emergency blanket, and other fun stuff
US only
Ends August 29th