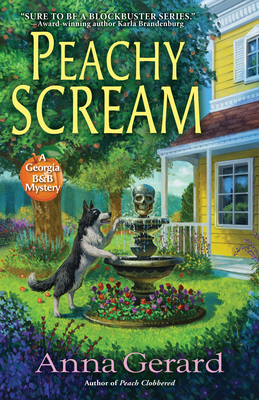 Last year I was fortunate enough to recieve an ARC for the cosy mystery Peachy Scream (Georgia B&B #2) by Anna Gerard through Netgalley. I read it shortly afterwards and today I'll post my review.

Description from Goodreads
To die or not to die? Georgia B&B proprietor Nina Fleet struts and frets to bring the curtain down on a Shakespearean actor's killer.

It's nothing short of inevitable that Cymbeline, GA, hosts an annual Shakespeare festival. But stage-struck Nina Fleet is about to learn that putting on an amateur theatrical production can be murder. Nina's anticipating showbiz glamour and glitz when a community Shakespearean troupe arrives for a two-week stay at her B&B. But the lights dim when she learns the company's director is her nemesis, struggling actor Harry Westcott--who still claims to be the rightful heir to Nina's elegant Queen Anne home.

Meanwhile, the troupe members are not content to leave the drama upon the stage. Accusations of infidelity and financial malfeasance make a shambles of rehearsals. And then, two days into the troupe's stay, the lead actor is found dead in Nina's formal Shakespeare garden. Murder most foul!

Worse, it seems every member of the amateur troupe has a motive--including wealthy construction company owner Marvin Jeffers, who seems to have a personal interest in Nina. But when the sheriff arrests the supposed boyfriend of the slain actor's widow, Nina suspects that the wrong troupe member is in jail. She and her trusty Australian Shepherd, Matilda, join forces (none too happily) with Harry to sleuth out the murder plot.

Will they find the real killer before someone else shuffles off this mortal coil? Find out in Anna Gerard's delightful second Georgia B&B mystery.

My Thoughts on the Book
Peachy Scream was such an entertaining cosy mystery. The plot/mystery was well crafted and the characters were well developed. I also really liked the Shakespeare aspect of the book.
krim leseeksemplar netgalley omtale roman