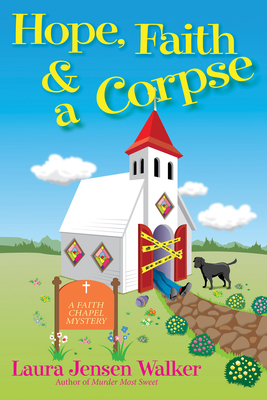 Last year I was fortunate enough to recieve an ARC of the cosy mystery Hope, Faith, and a Corpse: A Faith Chapel Mystery by Laura Jensen Walker through Netgalley. I read it shortly afterwards and today I'll post my review.
Description from Goodreads
In the tradition of M. C. Beaton, Hope Taylor, pastor of a small-town California church, tries to find out who sent a church elder to Heaven.

Hope Taylor arrives in Apple Springs to start her new life as the first female pastor of Faith Chapel Episcopal Church. The northern California town's quaint cottages, bungalows, and shops promise a fresh start for the 42-year-old widow and Bogie, her scruffy black Labrador. But where is Father Christopher? The kindly old rector who hired Pastor Hope was supposed to meet her upon her arrival, but he's nowhere to be seen. Hope's faith springs eternal, so she explores the little white church hoping to find Father Christopher. But when she enters the columbarium, she instead finds church elder Stanley King--his skull crushed by a fallen burial urn.

Hope had made Stanley's acquaintance before, and had struggled to take a charitable view of his character. Stanley was as wicked as he was wealthy, as petty as he was pious. His soul may have been holy, but his behavior was wholly rotten. The last time Hope had seen him, he had shouted drunkenly that she would preach at Faith Chapel over his dead body.

Many of the townsfolk witnessed the altercation, so Hope finds herself as the prime suspect in Stanley's murder. With Bogie's four-footed assistance, Hope is determined to find the real killer and clear her name...even if it will require a bit of divine intervention.
My Thoughts on the Book
Hope, Faith, and a Corpse was a fun start of a new series. There's plenty of quirky and relatable characters that's fleshed out. The mystery was well crafted with a few red herrings thrown into the mix, which made me guess until the end who the culprit was.

Overall, it was an enjoyable read and I would love to read more of this series.