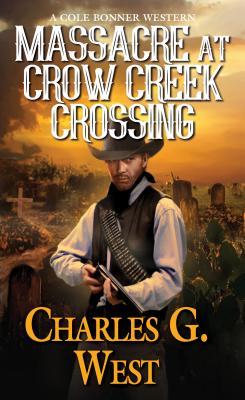 Last year I was fortunate enough to recieve an ARC of the western Massacre at Crow Creek Crossing by Charles G West through Netgalley. I read it shortly afterwards, but I haven't published my review until now.

Description from Goodreads
A shocking tale of violence and vengeance in the hills of Wyoming.
From Spur Award-winning author Charles G. West . . .

FIRST COMES BLOOD
Cole Bonner will never forget what happened to his family at Crow Creek Crossing. His wife, her parents, and their three young children--brutally slaughtered by outlaws. The horror of the massacre drove him into the wilderness. Drove him nearly mad. And drove him to seek an equally brutal revenge . . .

THEN COMES CARNAGE
Now, against his better judgment, Bonner is returning to the place that almost destroyed him. While hunting in the mountains, he discovers that a man has been murdered and a woman abducted. He manages to track the killers and free her. But to bring the widow to safety, he will have to face his own demons. Return to his old homestead. And relive the violence--and the vengeance--of another massacre at Crow Creek Crossing . . .

"Rarely has an author painted the great American West in strokes so bold, vivid, and true."
--Ralph Compton

My Thoughts on the Book
This one has a well-written plot as well as interesting characters and quite a few of them are three-dimensional. It also shows that the author has done some research on the period, to make things more realistic.

The book has a lot of action, which makes it a fast and fun read.