Review; Zoo Nebraska: The Fight for the Biggest Little Zoo in America by Carson Vaughan 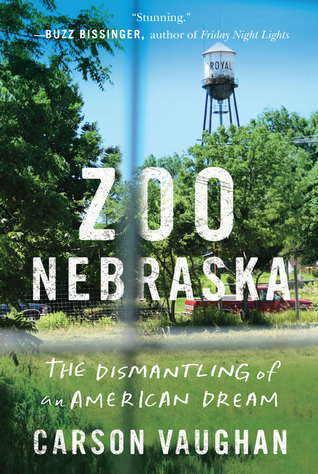 Last I was fortunate enough to recieve an ARC of the non-fiction book Zoo Nebraska: The Fight for the Biggest Little Zoo in America by Carson Vaughan through Netgalley. I read it shortly afterwards and today I'll post my review.

Description from Goodreads
A moving true story of American struggle.

Royal, Nebraska, population eighty-one—where the church, high school, and post office each stand abandoned, monuments to a Great Plains town that never flourished. But for nearly twenty years, they had a zoo, seven acres that rose from local peculiarity to key tourist attraction to devastating tragedy. And it all began with one man’s outsize vision.

When Dick Haskin’s plans to assist primatologist Dian Fossey in Rwanda were cut short by her murder, Dick’s devotion to primates didn’t die with her. He returned to his hometown with Reuben, an adolescent chimp, in the bed of a pickup truck and transformed a trailer home into the Midwest Primate Center. As the tourist trade multiplied, so did the inhabitants of what would become Zoo Nebraska, the unlikeliest boon to Royal’s economy in generations and, eventually, the source of a power struggle that would lead to the tragic implosion of Dick Haskin’s dream.

A resonant true story of small-town politics and community perseverance and of decent people and questionable choices, Zoo Nebraska is a timely requiem for a rural America in the throes of extinction.

My Thoughts on the Book
Zoo Nebraska was an interesting read and one ended up caring for Dick and the animals, but I felt the book dragged on a bit and it could have been a bit more concise.
faglitteratur leseeksemplar netgalley omtale