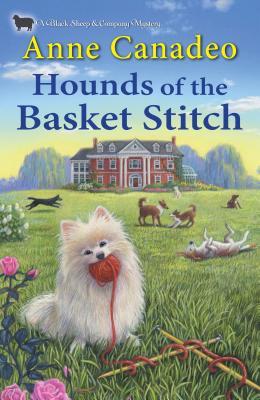 Last year I was fortunate enough to recieve an ARC of the cosy mystery Hounds of the Basket Stitch (Black Sheep Knitting Mysteries #11) by Anne Canadeo through Netgalley. I read it shortly afterwards, but I haven't published my review until now.

Description from Goodreads
The Black Sheep Knitters come to the aid of two sisters--one a victim and one a suspect . . .

Maggie Messina knows that knitting is not only enjoyable, it also calms both the mind and soul. She's happy to visit two sisters, Holly and Rose Piper, and teach them some simple stitches, while the rest of the Black Sheep knitters tag along. Dana Haeger has known the young women since they were children and is the closest thing to family the Pipers now have. Dana is especially concerned about Rose, who has been easily overwhelmed ever since a car accident many years ago. She is at her best managing the houseful of hounds that she rescues and shelters, while Holly runs the family nursery and remains devoted to Rose's care. The lesson goes well, but the knitters are troubled about the sisters living alone in such a remote corner of Plum Harbor.

Their worst fears are realized when Holly is attacked in her greenhouse and the building set ablaze. Rose is found unconscious nearby, her dogs running wild. When she wakes, her memory is blank. Holly is hospitalized and unable to offer even a clue. The Black Sheep suspect a mysterious drifter who had talked his way into a few days of wages, and just as quickly, disappeared. Or was it their estranged half-brother, Toby, full of family grievances and eager to make a claim on the estate? Or, heaven forbid . . . was it Rose? Hovering over all these questions like an ominous shadow is a dark secret from the sisters' past.

While it seems everything is unraveling, the knitters will need to keep their wits as sharp as their needles to prove Rose's innocence and stop a killer from striking again.

My Thoughts on the Book
This was a really charming cosy mystery, especially as it involved dogs and knitting. The mystery was well crafted and the characters had depth to them. Even though I liked most of the characters, such as the knitting group and Holly, I had a weak spot for Rose as she clearly loves the dogs and train a few of them to become therapy dogs.
krim leseeksemplar netgalley omtale roman