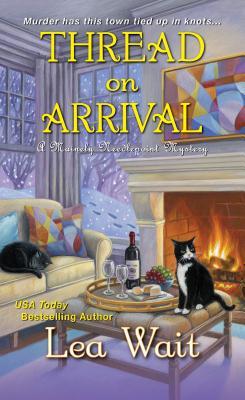 As I've read one of the other books in the Mainely Needlepoint-series by Lea Wait, I had a smile on my fave as I got approved for recieving an ARC of Thread on Arrival on Netgalley. I've now read the  book and today I'll post my review.

Description from Goodreads
In this coastal New England town, folks take care of the needy--but someone is killing without kindness . . .

Ike Hamilton is a part of the Haven Harbor community just like anyone else, though he's fallen on hard times and has to make do on disability checks and deposit bottles. Most of the locals do what they can to help him out, and needlepointing partners Angie and Sarah are happy to see him at the annual Blessing of the Fleet, honoring all those lost at sea over the centuries.

But when harmless Ike is stabbed, suspicion quickly falls on a troubled teenage boy who's new in town. Angie's convinced that young Leo is innocent--but if he didn't do it, who did? Turns out Ike may have appeared simple-minded, but he knew a few secrets that someone might have murdered him to keep quiet. Angie sets out to trace Ike's bottle-collecting route to find out what he witnessed--and for this killer, there may be no redemption . . .

My Thoughts on the Book
It's one of those cosy mysteries that has some sad moments as it touches upon subjects such as poverty and domestic violence, but it is important topics that needs to be discussed. Some might claim that as Thread on Arrival is a cosy mystery, it sugarcoats the topics and their seriousness, it can be a nice way to introduce the topics. Nevertheless, it is a charming read and as an added bonus there's a few recipes in the back.
engelsk krim leseeksemplar netgalley omtale roman