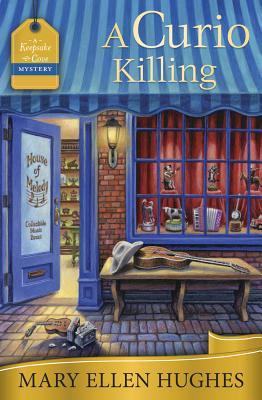 Last year I recieved an ARC of the cosy mystery A Curio Killing (Keepsake Cove Mystery #3) by Mary Ellen Hughes through Netgalley. I read it shortly afterwards, but I haven't published my review until now.

Callie Reed is looking forward to her first Keepsake Cove spring festival. But her excitement dims considerably when she learns that her ex-boyfriend, Hank, will be performing with one of the hired country-western bands. Callie vows to keep her distance, but that changes when the band's manager, Bobby Linville, is found dead, killed with the music box Hank bought at Callie's shop.

Hank is soon singing a sad tune in a detention center with Callie his only lifeline. Though thoroughly aware of his many faults, she knows violence and murder aren't in his blood. But that means one of her fellow Keepsake Cove residents must be hiding a dark secret--something Callie desperately needs to uncover.

My Thoughts on the Book
This was just an okay cosy mystery for me. Although it has some interesting characters and a decent plot, I felt the book fell flat a bit at times.
krim leseeksemplar netgalley omtale roman