Review; A Thread of Darkness by Sally Goldenbaum 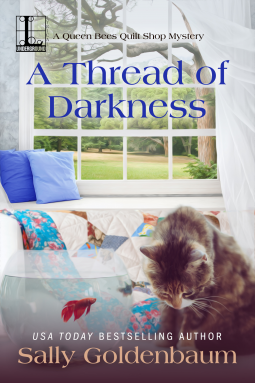 Last year I was fortunate enough to recieve an ARC of the cosy mystery A Thread of Darkness by Sally Goldenbaum through Netgalley. I read it shortly afterwards, but I havenæ't published my review until now.

Description from Netgalley
The national bestselling author of the Seaside Knitters mysteries returns to find the Crestwood Quilters on pins and needles when a killer strikes. . .

As owners of the popular bistro The French Quarter, former New York City restauranteurs Jacques and Laurel St. Pierre are the toast of the town of Crestwood, Kansas. Chef Jacques' culinary creations delight the women of the quilting club, who have embraced him as a friend. But Laurel’s anti-social behavior confuses Kate Simpson—until she spots Mrs. St. Pierre with another man in what appears to be a lover’s spat.

Gossip travels fast in a small town like Crestwood, and rumor has it this isn’t Laurel’s first indiscretion. She also filed a police report accusing Jacques of domestic abuse. And when Laurel’s murdered body is found Jacques is the prime suspect. To prove their friend’s innocence, Kate and the Crestwood Quilters must uncover the secrets of Laurel’s past—a patchwork history wrapped up in Kate’s own teenage years . . .

My Thoughts on the Book
It was fun "returning" to this series, as I got to know a few of the characters in the first book in the A Queen Bees Quilt Shop Mystery series. The plot and backstory was interesting and I still love the characters, especially Po, Kate and PJ.
krim leseeksemplar netgalley omtale roman