Review; Murder at the Arts and Crafts Festival by G.P. Gardner 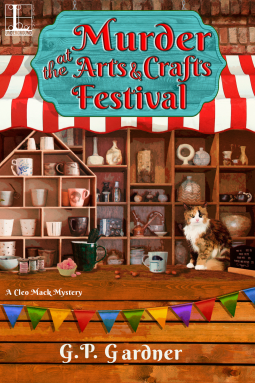 Last year I was fortunate enough to recieve an ARC of the cosy mystery Murder at the Arts and Crafts Festival by G.P. Gardner through Netgalley. I read it shortly afterwards and today I'll post my review.

Description from Netgalley
It’s late March in Fairhope, Alabama, and artists from around the country are flocking to the bayside town’s Arts & Crafts Festival. The annual tradition has something for everyone, only this year, the main attraction is murder . . .

Cleo Mack’s life has been a whirlwind since she inadvertely became the executive director of Harbor Village, a retirement community bustling with energetic seniors. Juggling apartment sales, quirky residents, and a fast-moving romance is tricky business. But on-the-job stress develops a new meaning when Twinkle Thaw, a portrait artist known to ruffle a few feathers, arrives unannounced for the weekend’s festival and drops dead hours later—mysteriously poisoned . . .

Twinkle’s bizarre death doesn’t seem like an accident. Not with a sketchy newcomer slinking around town and a gallery of suspects who may have wanted her out of the picture for good. As Cleo brushes with the truth, she soon finds that solving the crime could mean connecting the dots between a decades-old art heist and an unpredictable killer who refuses to color inside the lines . . .

My Thoughts on the Book
Murder at the Arts and Crafts Festival has some great characters and storyline. It's charming, fast paced and has a few red herrings thrown into the mix.
krim leseeksemplar netgalley omtale roman