Review; Into the Frying Pan by Sarah Osborne 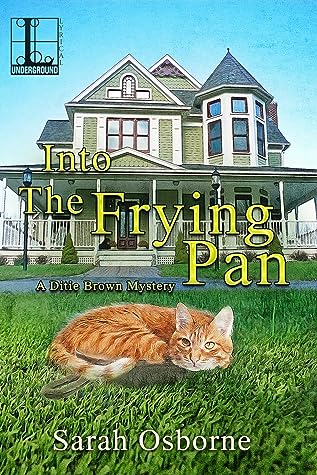 Last year I was fortunate enough to recieve an ARC of the cosy mystery Into the Frying Pan by Sarah Osborne through Netgalley. I read it shortly afterwards, but I haven't published my review until now.

Description from Goodreads
Mabel Aphrodite Brown has quickly learned that motherhood can sometimes be a real skirmish. But when death visits a Civil War reenactment, it’s murder that’s a battlefield . . .

In the thick of a hot, muggy Atlanta summer, all Ditie Brown wants to do is keep her kids occupied and get them ready for school in the fall. When her ex-boyfriend, Phil Brockton, shows up for a Civil War reenactment, she thinks it might be fun and educational for the kids. Plus, her best friend Lurleen wants to put on the costumes and get in on the action, and Ditie isn’t one to rebel.

But things go south after a cannon misfires, resulting in the death of Phil’s med school rival. Was it an accident or something more sinister? Ditie soon realizes the past rarely stays buried, and her digging reveals longstanding enemies, killer motives, and new jealousy. When another reenactor is “accidentally” shot, the pressure is on for Ditie to solve the murders—or else her friends may be history . . .

Includes Family-Friendly Recipes!
My Thoughts on the Book
This was an okay cosy mystery, but nothing more. It went on and on about the same things and the focus on identity/beloning became a bit too much for me. Though I did enjoy the element of civil war re-enactments and little Lucie.
krim leseeksemplar netgalley omtale roman