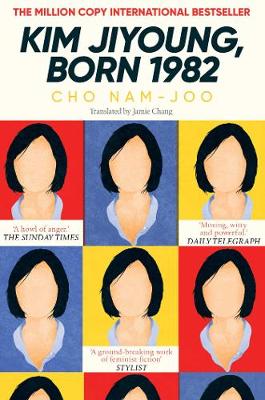 Earlier this year, I read the South-Korean novel Kim Jiyoung, Born 1982 by Cho Nam-Joo and today I'll post my review of the book.
Description from Goodreads
Kim Jiyoung is a girl born to a mother whose in-laws wanted a boy. Kim Jiyoung is a sister made to share a room while her brother gets one of his own.

Kim Jiyoung is her own woman.

Kim Jiyoung is every woman.

Kim Jiyoung, Born 1982 is the life story of one young woman born at the end of the twentieth century and raises questions about endemic misogyny and institutional oppression that are relevant to us all. Riveting, original and uncompromising, this is the most important book to have emerged from South Korea since Han Kang's The Vegetarian.
My Thoughts on the Book
Kim Jiyoung, Born 1982 is one of those fascinating books to read in one sitting, yet one of those books that keeps you thinking. It deals with feminist topics such as gender inequality, everyday sexism and double standards in a well-written manner (and it even includes some statistics and references).
It's one of those books I would recommend people to read, and also, I think this is a book that should be taught, either in high school or at university (if studying literature and/or gender studies at the latter).
omtale roman