Review; The Conjurer (The Vine Witch #3) by Luanne G. Smith 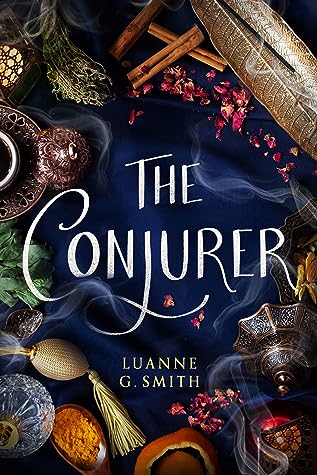 I was fortunate enough to recieve an ARC of the fantasy novel The Conjurer (The Vine Witch #3) by Luanne G. Smith through Netgalley. I read it shortly afterwards and today I'll post my review.
Description from Goodreads
Sidra didn’t murder her husband. Yet even a jinni can’t wish away a wrongful imprisonment. Determined to prove her innocence, she returns to her adopted home—a French village renowned for its perfume witches—with her friends Elena and Yvette by her side. Here is where Sidra’s true destiny awaits, but danger also lurks in the village’s narrow lanes.

On her trail is Jamra, another jinni, who’s after more than revenge for the murder of his brother. He also seeks vengeance for the indignities inflicted on jinn by mortals over the centuries. When he learns of an ancient relic capable of unleashing chaos on the world, and that the weapon is in the hands of his murderous sister-in-law, he vows to destroy Sidra to get it.

Relying on a sisterhood of magic, a mysteriously faithful dog, and a second-rate sorcerer, Sidra defends herself using the village’s greatest asset: its perfume. It’s as beguiling a lure as it is a formidable shield. But is it enough for Sidra to protect herself and those she loves from powers yet to be released?
My Thoughts on the Book
As I've read the two other books in The Vine Witch-series, I couldn't resist The Conjurer. The Conjurer focuses on Sidra and it's a well written conclusion for this trilogy. I loved the author's writing style considering I felt I "walked along" with the characters as it happened, due to the well written descriptions. I loved the trio of Elena, Yvette and Sidra and how they develop through the book and the series in general. The world building in the book and series are well developed and written in an understandable way.
The Conjurer (and The Vine Witch trilogy) is well worth the read and I highly recommend it.